Today, I’m not posting any video. Today, I’m posting about a (gasp! yes another) fundraising effort by the musical folks of WSNC. I’ve talked about Dale Cole and the Virtual Village a few times and they have been on The Less Desirables a few times. DC&VV put together a compilation of area musicians, with much thanks to Steven Jones for putting it together. If you look through the list you will find a few names that you’ve heard me talking about on this blog or have heard on TLD, either live or via the music section.

Names like: Clay Howard, Steven Jones, DC&VV, GORyanGO (Matt Weiser, part of VSS and has been a guest on TLD a few years back), Whiskey Foxtrot (guests just last year), Doug Davis (yes, that Doug Davis), Joshua West, Lee and Susan Terry & the Near Strangers (the first live musical artists ever on TLD), Jukebox Rehab (a few months back), Patrick Ferguson, Brad Ward (a friend and member of the TBD Referral Group), Audrey Muck (with her husband Eric, whom I’ve talked about a lot, she was on WFDD, is part of VSS, they owned Augustine’s, has been on TLD, etc), James Vincent Carroll, and #25, a little tune you may have heard from someone named Timothy G Beeman II. You may have heard it a few times because I’ve played it on here a few times. It is the last song that I’ve written, to date and that’s 10 years ago. Wow.

Anywhat! You can listen to all of it for free but I strongly encourage you to purchase the compilation. It’s only $20 and proceeds go to WSNC service industry workers. We all would appreciate it. We are Winston-Salem Strong, Winston Strong, We Not Me, Support Local, We Are All In This Together!! Click here to hear it and purchase it, if you’re so inclined.

Until tomorrow, Winston-Salem Strong!
Scorp out!

We recorded Fan Interference today and TC and HB interviewed Greg Dortch, a former All-ACC WR from Wake Forest who is attending the NFL Scouting Combine in a few weeks and hopes to be drafted. It was a cool interview. 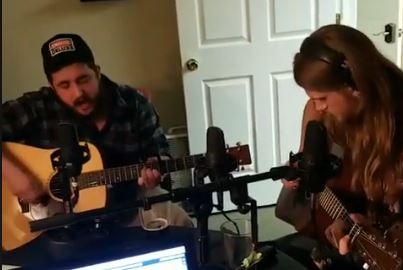 Sam (l) and Seth performing live on The Less Desirables

Then I ran down to Uncle Buzzy’s and attended a tasting especially for food bloggers. I ate myself stupid. I probably had around three pounds of food. That may or may not be the case, but it sure did feel like it. It was all so good, though. Look for a post about it in the next few days, over on The Man Who Ate the Town blog/podcast. Again, it was a lot of food.

Then we recorded The Less Desirables and we had Sam Foster and Seth Williams of the band Whiskey Foxtrot and they played three tunes on the podcast, live. I did Facebook Live teasers of the three songs. So you should go listen to them, as they’re pretty awesome tunes. 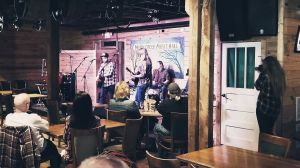 I totally wanted to say that I had fun playing with the Threadbare Trio + 1 yesterday at Muddy Creek Cafe/Music Hall. We played with Chad Huskey as our “+1” and he was awesome, as always. Sam Foster and Seth Williams’ band, Whiskey Foxtrot started the show off with us and they even performed two songs with us, one to start the show (“Midnight Rider”) and one to finish with us (“Breakdown”).

I met two folks that I’ve been friends with on Facebook for a while now but had never met. So Steve Worley and Terry VunCannon, it was cool to meet you both.

I also saw 3B’s Second Grade teacher, who is a friend of mine. I haven’t talked to her in a few years but it was cool to say hey for a bit. She and the BCPF talked a good bit.

All in all, it was fun. So, thanks to Shana and Bill for having us and thanks to my Threadbare Trio brothers, Clay Howard and Neal Goode for playing with me and thanks to Whiskey Foxtrot for doing the show with us.

—
“The cafe is open for lunch Wednesday thru Sunday, with daily food specials, and award-winning soup!. The hall and cafe are available for private functions/events.” – Muddy Creek Cafe