This week on The Man Who Ate the Town Podcast, Kelly and I discussed two popular downtown WSNC food/drink festivals merging, as well as a new drink menu and schedule of events for Reboot Arcade Bar. And, Wise Man Brewing will be doing another beer dinner/tap takeover (ish). You can listen to this week’s show HERE. 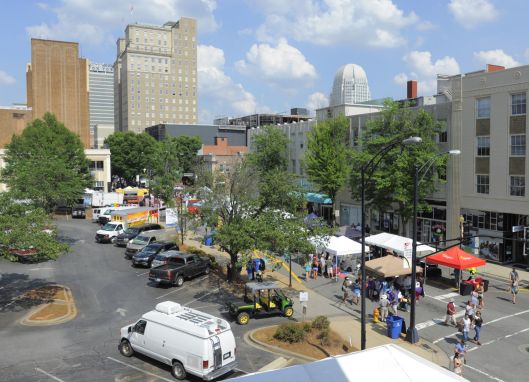 —
“While a lot has been accomplished downtown, the goal was not to be complacent, but to raise the bar.” – Jason Thiel

I had a full day. I mean full! I was up at 6:05am and was out the door by 6:35am. I made my way to the Wake Forest Innovation Quarter and attended ConvergeSouth, a tech, social media and small business marketing conference that happens once a year. I am a part of the planning and such. I’m not a board member, I guess I’m a committee person.

I was up and standing all day videoing several of the main speakers. I filled a full 32GB (I believe) flash media hard drive on my HD Vidcam, plus a little space on my GoPro. My feet and back are sore and tired now, and it’s late.

I feel my brain is fried so I won’t make a lot of sense if I go into details, right now. If you’re in marketing for your small biz or need to know more techie stuff or using social media or whatever, this conference is for you. Tune in for next years edition and attend, you’ll have a good time. I’m done, though. I am going to bed, because tomorrow is full: Texas Pete Culinary Arts Festival. Stay tuned (and be forewarned) there will probably be a shload of pics of food tomorrow and Sunday, there’s another food event I’m attending that day, too.

Have a good night, until tomorrow, same blog channel…
Scorp out!

—
“When they have their hands on their knees, that’s when they’re tired.” – Eric Dickerson

There are people that come into your life that you spend a lifetime tuning and tweaking the relationship to become what it is you feel you should have in a true friendship. Sometimes it works and sometimes it doesn’t; the point you decide that perhaps it was all for naught. Then there are people come into your life and you click with from the very minute you meet them. From that very first instant, you’re destined to great times together.

I have one of those friends I’m going to talk about today. I’m not going to mention his name outright but you’ll see him in the picture and if you know him, chances are you know why I say the things I do. We met just a few months ago, really. He had some people that he was working with to try to help them get a radio/podcast thingy-ma-bob working or started or figured out and brought them in to see me. I talked with them 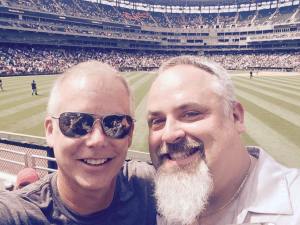 and that was a great meeting. Things haven’t panned out, yet, but I’m hoping they’ll come around. I like them just fine no matter what. But this person, the Right Reverend Cool, asked if he could stick around and talk to me about some business as well. I guess he liked my vision and what I had to say. Again, we clicked.

We decided to start working together on a podcast idea that he had and it was easy to work with him because he has a career history in radio both locally and in much bigger markets. It’s hard to find much bigger than Chicago, eh? There’s places but, still. So, we worked together. But, that wasn’t it. We became good friends. We started hanging together with other great friends outside of the work and had many conversations, some less lucid than others, and all of them were great, even if just silly stuff and music and general stuff. A lot of times he talks over my head, but of course I’m not going to tell him that. I don’t want him to think I’m dumb.

He moved away for a bit, roughly 2 months, give or take. He moved back to Chicago. It just so happened to be when I was going up there with The BCPF for her work. We got to meet up for one day and actually went to a White Sox game. It was the last time I saw him until the Texas Pete Culinary Arts Festival. He had mentioned he was coming back as he had taken care of or put to bed the circumstances he had to go back for. That was a great thing. He’s a great guy, all around and he’d give you the shirt off his back even though it would be 7 sizes to small for me. I see Chris Farley singing “fat guy in a little coat” when I think of it. I find it hard to believe there is a more genuine person in the world than this dude of all dudes. In such a short time he’s become really, really important to me. Enough arse kissin’.

Apparently, my blog post yesterday threw some people off and to them, it seemed kind of cryptic. Only those who really knew what was going on were the ones that didn’t wonder for the worst. A few had sent texts or IMs and I had to assure them that all was well it’s just a hurdle that I got to walk around and not jump over. Today, he happened to be downtown and wanted to come see me. I was on my way to lunch and he went with me and we sat and had lunch and got to have a good conversation and he voiced his concern with my post. Again, all is well. We talked about restarting his podcast, which, no hurry for, when he’s ready. We talked about my visions for The Less Desirables Network‘s future(s), yes plural. It was just a good talk. Right Reverend Cool makes me feel good about me and the world. The BCPF says she loves him, too. For her reasons only, mostly because of me, and I can’t blame her for those. I know he was only gone for a small amount of time but I have to admit that I really missed him whilst he was gone. He’s back and I see a lot of cool things happening in the future. Cheers to my great friend! Everyone should be so lucky to have a friend like him. And, to all my friends, I feel quite lucky to have you all in my life.

—
“I would like to be remembered as a man who had a wonderful time living life, a man who had good friends, fine family – and I don’t think I could ask for anything more than that, actually.” – Frank Sinatra

I know I’ve talked about the joys of football season finally coming back. Well, Saturday night, after The BCPF and I got home from a long and fantastic day/evening at the Texas Pete Culinary Arts Festival we turned on the Alabama/Ole Miss game which started remarkably late. I can’t figure out why they started so late, neither team is on the west coast, not even mountain time. Anywhat! We caught it just inside the second quarter. I’m not the greatest college football fan but like in the pros, I have teams that I hate for really no reason other than I just do. Two of those are Ohio State and Alabama (Michigan isn’t too far behind). So, I watched, salivating, because Alabama was losing. Not only were they losing but at one point, I’d say they were getting their collective arse handed to them. They only lost by six in the end but that was really “garbage time.”

Then Sunday came and I finally got to watch a full day of NFL. I didn’t get to see much last week because of obligations but I watched my Pittsburgh Steelers whip the San 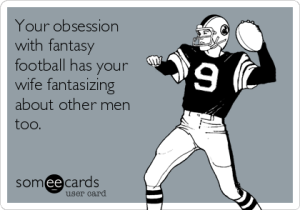 Francisco 49ers (one of those aforementioned teams that I absolutely can’t stand). Then we watched other games throughout the day. It’s extra interesting because, for the first time, The BCPF is participating in the Fantasy Football League with me and a bunch of friends. It’s competitive and she wants to win. I don’t know if I can remember her being this competitive over anything before. I like it though. She’s a spicy one. We sat beside each other and she kept her laptop on her lap and we watched, anxiously as the players did or did not do what they should to get us points. I’m quite happy with where my team sits this week. I am played out (meaning that all my players are done) for the week but she has a player playing tonight, as does her opponent. Here’s hoping that she gets a great deal of action from this Tight End. Her opponent has a Kicker playing. I hate the TE position for fantasy because generally, they’re the 3rd or 4th receiver in line. They’re hit or miss for points. But, she needs a good night from him.

The point of all that was, it was awesome to sit beside my wife (who has never been a football fan) and watch something that I feel so strongly about and her actually enjoy doing it with me. She has always sat beside me doing other things while I watch but, other than a Steelers game or Seahawks game (that’s her team if it weren’t for the Steelers; if she were going to pick one). It was a good Sunday. Finished it off by watching the Night of Champions PPV with The Boy, which truthfully, he slept through the whole thing. It was decent. Then watched the Packers/Seahawks game. Not the greatest outcome but was a good game. Great day, indeed.

—
“Thank you… fantasy football draft, for letting me know that even in my fantasies, I am bad at sports.” – Jimmy Fallon