Per IMDb: “In the aftermath of the Persian Gulf War, 4 soldiers set out to steal gold that was stolen from Kuwait, but they discover people who desperately need their help.”

When SFC Barlow (Wahlberg) and PFC Vig (Jonze) find a map in an Iraqi soldier’s buttocks, they, along with Chief Elgin (Ice Cube) and Major Gates (Clooney) embark on an unsanctioned, illegal and dangerous mission to steal from Saddam Hussein’s stash of gold, that he stole from Kuwait. After a bit of work, they find the gold but also find more than they bargained for in a group of Iraqi rebels that are being pushed around, tortured and 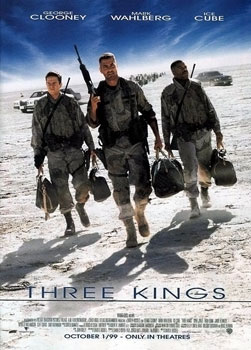 killed by Saddam’s army. An errant exchange of gunfire leads to a mini war between the Americans and the factions of Saddam’s army. There’s a hunt, chase, destruction and apprehension. One of the main four is captured and the others, after paying the Iraqi rebels to help locate him, must attempt to rescue him. Do they find him? Do they die trying? You’ll have to watch to find out.

The first thing that stands out to me is, yes, it was 1999, but I believe that the US Army has a better tracking system than to just lose four soldiers, weapons and a humvee. Yes, it was supposed to be early, they grab what they are after and then back to camp. How were they going to get the gold out of the country? What would they have done with the gold? Who would buy it? There was a lot of weird ‘what ifs’ going on in this film. Now, all that being said and if I can put my suspension of disbelief to work, it was actually a good film.

It wasn’t what I expected. I thought it was just a war film. That’s okay but I don’t care anything about any wars that formulate, start and happen in my lifetime. The latest war I want to watch a film about is Vietnam, and even then, war films aren’t my thing. This, however, is more of a black comedy than a war film. Let’s call it a action-packed black dramedy. Yes, let’s. The acting was good. I know that George Clooney gets a bad rap sometimes, as does Mark Walhberg, but these guys can act, it’s just usually in some crap roles. Ice Cube is actually a good dramatic actor, too. His comedies are usually good if they’re not pointed at families; Friday anyone? Otherwise you’re stuck with Barbershop and Are We There Yet? This was my first experience with Spike Jonze that I know of. He’s not bad. A tad hick-ish, but not bad.

This was one of the 400 nominees for AFI‘s 100 Years… 100 Movies, the 2007 edition. As of this writing, I now have two more to go to complete the list of 400. It may be finished by the time this airs on the podcast. Rotten Tomatoes has it rated at 94% Fresh with an Audience Score of 77%, which is actually a large gap. IMDb has it at 7.1 stars out of 10. It’s not available on Hulu, Netflix or even DVD.com but it is available for rent on Amazon Prime, which is where I watched it. It used to be on Netflix streaming but it was removed some time ago. As I said, I thought it was a pretty good film and I’ll rate it 4 out of 5 stars. Have you seen it? Do you agree with me? What would you like to see/hear me review?