I have been watching a show on Netflix for the last few weeks and I’m really enjoying it. It’s called Wentworth and at first, I thought it was a knockoff of Orange is the New Black, which I liked but got tired of really quick. It is about a women’s prison, well, correctional facility in Australia that shows a lot of the “political” and “hierarchical” situations including “top dogs” and “bosses,” crooked governors, secrets, and revenge.

The actors are great and the storylines are interesting. I’m on season three now (there are six so far). Wentworth is set in Australia and focuses on Bea Smith (Danielle Cormack) when she first enters prison after being charged with the attempted murder of her husband. She is sent to Wentworth on remand, where she lives while awaiting her sentencing. She is in the absolute bottom of Wentworth’s tiered society is forced to learn how to survive.

There are only 12 episodes per season and there are only six seasons, as of yet. You can watch them all on Netflix and I highly recommend it. Check it out.

Per IMDb: “Two men reaching middle age with not much to show but disappointment embark on a week-long road trip through California’s wine country, just as one is about to take a trip down the aisle.” 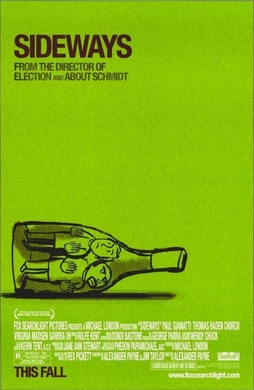 connoisseur, takes his college roommate, Jack (Church), an actor who has passed his prime, on a week-long bachelor party through the Californian wine country. Jack’s to be married to Christine (Alysia Reiner – Figueroa on Orange is the New Black) a wealthy socialite but he’s not sure he’s ready to go through with it. Miles takes him to Santa Barbara County to the area that he is quite familiar with and is known, and liked, by the locals, including Maya (Madsen), a Graduate school student who is also a waitress at The Hitching Post, and a Stephanie (Oh) a wine pourer at one of the wineries Miles frequents.

Jack tells Miles that he’s going to get lucky before he gets married and ends up starting an affair with Stephanie as Miles is pushed upon Maya. He does like Maya but has a hard time with Jack’s affair with Stephanie because it’s both wrong and it’s screwing up his plans for the week. All the while, Miles is still somewhat hung up on his ex-wife, Victoria (Jessica Hecht – Susan, Ross’ ex-wife’s lesbian lover in Friends) and is torn up to find out she’s remarried. That plays in his mind as does Jack’s infidelity and his struggle to strike up a moment or more with Maya. One thing leads to another and the whole situation blows up. How and why? You’ll have to watch to find out.

I haven’t been to California’s wine country, but I really want to go. I want to, especially now that I have gained a new fondness for red wine and seeing the beautiful countryside in this film. Miles talks frequently and passionately about Pinot Noir in the film while pretty much taking a dump on Merlot. I don’t have a preference there, but I like jammy. I don’t know enough about either to know if they’re that way. However, the film did pique my interest on it. I’ll have to check more out. Incidentally, some reports said that after the film was released Merlot sales dropped and Pinot Noir sales jumped. If it had any kind of impact like that, then… “wow!” I say.

This is the first film that I can remember seeing Paul Giamatti in that he wasn’t playing a skeez. I found it hard to not see him as one, which in some ways hampered my ability to feel sorry for him, but I did anyway. Don’t take that wrong. I love his acting and enjoy him in films and he plays those skeez parts quite well. But, I did get over that after a bit and did feel sorry for him; the way that was supposed to go. You’re to get annoyed at Jack for being the a-hole and feel sorry for Miles. That’s the human side of all of this. You pull for Miles to just get with it about Maya and let go of the ex and you get annoyed when he doesn’t. You keep waiting on Stephanie to find out about Jack’s upcoming nuptials and hope that she beats the shite out of him. That’s the human element, again.

This film was one of the 400 nominees for the AFI‘s 100 Years… 100 Movies distinction. That’s why I watched it. It’s only available via Netflix‘s DVD.com or renting it from Amazon Prime (although with a Starz subscription, you can get it free). I have owned a copy since it came out, but never got around to watching it until now. It was nominated for five Academy Awards: Best Picture, Director, Supporting Actor (Church), Supporting Actress (Madsen) and Best Writing – Screenplay Based on Material from Another Medium… whatever that means. Oddly enough, the only one it won for was that last one. Scorp shrugs.

Rotten Tomatoes has it rated at 96% Fresh but only 78% on the Audience Score. IMDb has it at 7.5 stars out of 10. I will say that I enjoyed the film. I thought it was good on its own merits but I can’t for the life of me figure out how it was good enough to be considered one of the best of all time. There are plenty of films that aren’t on that list that I’d consider for that list over this one. Again, I enjoyed it and rate it 4.25 out of 5 stars. Have you seen it? What did you think? What would you like to read/hear me review?

I need to tell you, like you don’t already know, Dear Reader, how awesome Netflix is. My entire The Less Desirables Movie of the Week experience that I lay out for you every week would be absolutely nothing without it. Yes, I have other services and sometimes discs that I can use for the MotW but I choose Netflix because it has the widest breadth of entertainment for my watching/viewing needs.

I use the films that I watch to report to you via the MotW “report” that I not only tell you on The Less Desirables, I also write about them as my Saturday post. That gives you time to listen to the show before it comes out in “print.” Out of the last fifty films I’ve reviewed, I believe around forty of them have been Netflix watches. About seven were on another service and then the last three I had on disc of some sort.

It goes beyond The Less Desirables, though. I use it for my own viewing pleasure. I watch shows like Orange is the New Black, older shows like Friends or when I was catching up on shows like Mad Men, Breaking Bad, or The Office before their final run was over. The BCPF and I like food, wine, beer, heck… all alcohol! So we can watch films, documentaries, shows, what have you, like Somm, Parts Unknown with Anthony Bourdain, Bottle Shock, etc. In fact, the film for this week’s The Less Desirables MotW is going to be about wine. It will be good stuff.

The selection that Netflix has is incredible. There are things that leave but they at least give us a little warning so we have time to watch up our stockpile before it’s

removed. The quality is just as good as on DVD, when the cable company is doing its job, and that helps the picture quality, a lot. The pricing is reasonable and we can watch anywhere we go, whether by PS3, smartphone, laptop, or any way you can stream video, almost anywhere in the world at the touch of a button and immediately get what you’re looking for.

Say someone tells you about a film you need to see. Not home to check on it or add it to your queue? No problem, tap the app and you’re in (with credentials, of course). Login allows you to watch the film on your device, check your list, add to that list and it will be ready when you are. This service is fantastic and whomever thought it up was genius. I love Netflix. There, I said it. I love Netflix. If you’re not on board the Netflix Train already, shame on you. Get on board and let’s get to watching some streaming (and if you’re into that kind of thing, disc watching)! Yay Netflix!

—
“There is a revolution happening, and within two years I think that Wi-Fi and Netflix will be built into all the televisions.” – Reed Hastings