The Less Desirables Movie of the Week is In a World.  Eugene and I, along with our Official Guest, Phillip Oakley of Common Giant, discussed how Eug and I are in the VO (that’s voice over for the layperson) business.  We do commercials, plugs, imaging, corporate presentations, etc.  We do that.  And the discussion was lively, as always; we don’t do light and fuzzy.

In a World humorously presents the dilemma of the VO industry after the passing of the “Voice of God,” Don LaFontaine.  LaFontaine’s signature line was “In a World.”  So when a movie company chooses to relaunch the phrase to accompany a new trilogy that closely resembles the “Hunger Games” series, the search is on to find the next torch bearer for it. 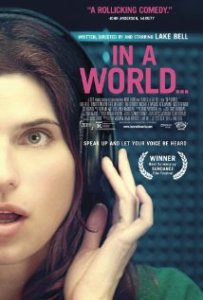 Lake Bell plays Carol Solomon, a struggling and frustrated voice coach whose father, Sam Sotto (played by Fred Melamed) is a famous VO artist who was in league with and a contemporary of LaFontaine.  Carol is always living in the shadows of her father as he turns his efforts on his protégé and friend, Gustav Warner.  Gustav has a VO job that he can’t make because of laryngitis.  Carol is friends with the studio engineer and he asks her to do a temp track (just to fill the spot for editing purposes).  The director of the spot is so taken with her work that she offers her other work.  Of course, she doesn’t tell her father and Gustav loses out to Carol on several other jobs although he doesn’t know who it is, only that it is a woman.

When word gets out that the “trilogy” is looking for someone to revive the famous phrase, Sam bows out so that his friend Gustav can get it.  Carol is also persuaded to audition for the part.  Gustav throws a party and Sam talks his daughter into going because he likes to make high profile appearances.  Not knowing who is who, Carol and Gustav hook up.  Gustav finds out that night that Carol is the woman that has been his competition of both regular and the coveted phrase job, he continues to pursue her, not knowing it is his mentor’s friend.  Gustav tells Sam that he found out that the party goer was his competition and that they did all this wild and wooly stuff in bed.  Sam finds it humorous.

At a dinner, it is revealed that Carol is the mystery woman vying for the job and the one that Gustav is bragging about.  Sam is livid, both at Gustav and Carol; he is quite dismissive of her. He then throws his hat into the ring for the phrase, hell-bent on beating both the loud mouthed younger man he’s been mentoring and his insolent daughter (how dare she, right?).  Then it’s a mad rush for all three to get the part.  Now, I’m not going to tell you what happens, you’ll have to find that out for yourself.  Of course, everything that I’ve said wasn’t ruining anything, it’s out there on the surface.  How it goes down, and all the subplots, well,  that is for you to see.

I saw In a World in the theater, a/perture Cinema, The Less Desirables Official Movie Sponsor, with The BCPF. I think that my love of the VO industry made me like this more than I was supposed to. Two of my favorite VO artists, Joe Cipriano and Mark Elliot make cameos (LaFontaine is my VO idol).  Everything about the film intrigues me as I know way more than I should about the industry.  All but actually getting to hang in those circles.  I can keep striving, through.  Anywhat, it’s a fun comedy and I do recommend seeing it.  It is streaming on Neflix, which is where I watched it.

The film was directed, written and stars Lake Bell.  I rate it a 3.5.

What are your thoughts on it?  Send me a message, drop me a line, Facebook me, Tweet me, whatever, just let me know how you feel.  As always, feel free to suggest a film that you’d like me to review or argue about.

—
“I just want to give you my card. I’m not a vocal coach anymore, but I would make an exception for you because you sound like a squeaky toy. And I don’t mean that in a bad way.” – Carol (Lake Bell), In a World (2013)