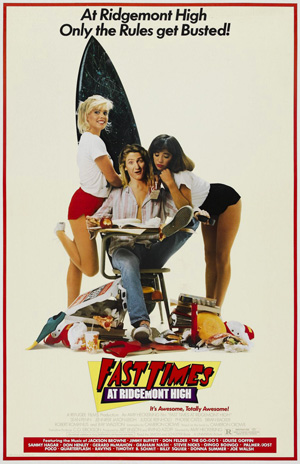 Per IMDb: : “A group of Southern California high school students are enjoying their most important subjects: sex, drugs and rock n’ roll.”

Brad Hamilton (Reinhold) is looking to get out of high school on top. He’s popular and a senior. But, he’s not really enjoying his time with his girlfriend and a dipstick customer costs him his job at the local All-American Burger. He gets another job at Captain Hook Fish & Chips but, after realizing it was humiliating as all get out to deliver food in that costume, he quits that. So, why not go home and relax instead? He’s on top of the world right?

Brad’s sister, Stacy (Leigh) is also popular and works at the mall in a pizza parlor. She gets dates with older guys by lying about her age. She’s pushed by her seemingly promiscuous friend Linda (Phoebe Cates) to be more bold. Stacy tries and isn’t really thrilled about it. There’s a nerdy dude named Mark Ratner (Brian Backer) who is interested in Stacy but is too shy to ask her out. His buddy, the concert-ticket-scalping-pseudo-suave-dilettante , Mike Damone (Robert Romanus) talks him into taking Stacy out to a local German restaurant. While there, Mark realizes he has forgotten his wallet and calls Damone to bring it to him. Stacy tries to seduce Mark but his shyness gets the best of him and he leaves, rendering Stacy a bit frustrated. Eventually, Damone moves in gets a little time with Stacy.

Jeff Spicoli (Penn in a role unlike anything else he ever did) is a stoner slacker who dreams of nothing but surfing the gnarly waves. He is also the prime nemesis of the dry and no-nonsense history teacher, Mr. Hand (Ray Walston). Spicoli breaks rules and is just a nuisance, but, I don’t think he means to be. I think he’s just a free spirit. This film is a culmination of their lives and more. What happens with them? You’ll have to watch to find out.

I defy any male aged 40-55 to hear the first few bars of “Moving in Stereo” by The Cars and not have fond memories. When I see The BCPF get into our bed, it reminds me of that and I hear that song. If you don’t know what I’m talking about, then you have to watch the film. The cameos in this film of folk that either were just on their way into acting or perhaps not necessarily known to the general public in 1982, were all fantastic. Names like Forest Whitaker, Eric Stoltz, Anthony Edwards, Nick Cage were all up-and-comers. Actors Taylor Negron and Vincent Schiavelli have both passed on but you’d recognize them in the film from other things. Another quick cameo is from Nancy Wilson of he band Heart. She’s the blonde in the car that flirts then laughs at Brad in his pirate costume. She’s in the film because her husband, Cameron Crowe wrote the book and the screenplay. She’s made a lot of cameos in his films over the years.

The acting in this film was typical early 80s. Good, but you could tell the folks were just getting going. It’s cheesy early 80s cinema at its best. The soundtrack is chock full of greatness, as well. Then again, it is a Cameron Crowe film. This one was directed by Amy Heckerling (European Vacation, Clueless, Look Who’s Talking, Johnny Dangerously and so on).

Rotten Tomatoes has it at 78% Fresh with an Audience Score of 80%. IMDb has it at 7.2 stars out of 10. It is only available via Netflix‘s DVD.com or renting or buying on DVD or digital on Amazon. I have it on DVD and we watched it with 3B. The swimming pool scene, he really enjoyed. I rate the film 4.25 out of 5. Have you seen it? What did you think? What would you like to read/hear me review?

Per IMDb: “A noble underachiever and a beautiful valedictorian fall in love the summer before she goes off to college.”

Lloyd Dobler (Cusack) starts obsessing over Diane Court (Skye) at their high school graduation. She’s the valedictorian, and most assume she’s “out of his league.” She has won a fellowship to attend school in England and her father, Jim (Mahoney), couldn’t be happier. Jim is the owner of a retirement home and is his daughter’s best friend, after the divorce from her mother. They have a good bit of money and that adds to the ways that Diane and Lloyd are different, although neither of them cares.

Jim is worried that Lloyd may be a detriment to Diane’s upcoming matriculation in England; afraid that she’ll want to stay home instead of going. The more the two teens get involved, the more Jim becomes less tolerant of Diane’s “freedoms.” It doesn’t help that the IRS is investigating Jim on fraud charges through the retirement home.  Do the crazy kids stay together? Do they break up? What happens with the IRS? You’ll have to watch to find out.

As usual, Joan Cusack plays in the film with her brother, John. She doesn’t give any Oscar-winning performances but that wasn’t what she set out to do, in this film. It was so strange seeing John Mahoney with dark hair and playing a role outside of Martin Crane, Frasier’s father in the television series. There are times when you don’t like him and I’m not used to that with him, either. There are times when you certainly do like him, though.

The BCPF thinks Ione Skye got the part because she’s pretty while I think she is an awful actress and looks like a horse. As the film went on it was like she learned to act. The acting was less atrocious from her the deeper the film went. Beyond that, I think that she and Cusack (who can act) actually had good screen chemistry.

Probably the most notable thing about this film is its soundtrack. One of the most famous scenes of teen-driven dramedies happens in this film: the iconic holding of the boombox playing “In Your Eyes” from Peter Gabriel (off my favorite album of all-time). Cusack reenacted that onstage at a Peter Gabriel show a few years ago. In addition to PG, the soundtrack included Nancy Wilson of Heart (her husband, Cameron Crowe wrote the film), Depeche Mode, The Replacements, Cheap Trick, Red Hot Chili Peppers, Living Colour and Joe Satriani. It’s a great soundtrack and the songs fit well in the film.

Overall, I think it was a decent film. Not my favorite of teen films but it was pretty good. Rotten Tomatoes has it at 98% Fresh with an Audience Score of 85%. IMDb has it at 7.4 stars out of 10. We rented it from Amazon Prime and I will rate it 4 stars out of 5. Have you seen it? What would you like to hear/read me review?