Per IMDb: “Norman is a curmudgeon with an estranged relationship with his daughter Chelsea. At Golden Pond, he and his wife nevertheless agree to care for Billy, the son of Chelsea’s new boyfriend, and a most unexpected relationship blooms.” 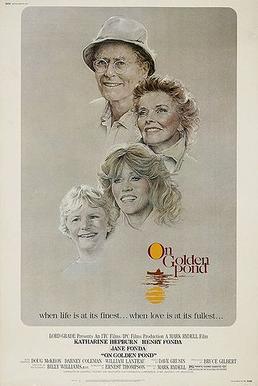 who retreat to their cabin in the woods for the summer where Norman turns 80. Their estranged daughter, Chelsea (Jane Fonda), comes to visit with her new beau, Bill Ray (Dabney Coleman) and his son, Billy (Doug McKeon). Norman and Chelsea have always had a strained relationship mainly because she can’t stand up to him and he can’t stop being a grouch. Chelsea and Bill are heading to Europe and leave Billy with the elders.

Billy makes it known that he’s not going to take any crap from the oldsters. Norman and Ethel play along and let him do his thing. Over time, Billy and Norman develop a relationship of respect over the word “bullsh*t” and going after Norman’s fish rival, “Walter.” Does this respect last or do they fall back into the contentious relationship they had and just like Norman had with Chelsea? You’ll have to watch to find out.

This has to be one of the longest, most serene, beautiful, yet shakiest intro that I’ve ever seen. Great theme song, as well. For those that are fans of the early 80s television show, Newhart, the opening credits for that show are actually leftovers from the filming of this film. I thought that was neat. It’s apparent that Norman is losing his faculties, what I’m figuring was portrayed as senility at that time, and it certainly would be Alzheimer’s, now. I think I read that Alzheimer’s diagnosis for the symptoms changed around 1977, which was only 4 years prior to this film. They never mentioned that in the film.

It was hard to listen to Katharine Hepburn speak as she was really shaky. She played the character very well, though. Henry Fonda played a great Norman and was quite believable. Doug McKeon, though, I thought was the true star of the film. That, and the scenery. The location and scenery were lush and fabulous. Most of the outdoor filming was in New Hampshire while the actual setting, from what I can understand, is Maine.The relationship between the father and daughter in this film was almost a mirror image of Jane and Henry Fonda’s own relationship. It was honest, although I’m not a big fan of Jane’s acting.

Growing up, I only saw this as a drama and I’m generally not into viewing a lot of dramas. There were a lot of lighthearted moments and some really funny parts in the film and I’d categorize it as a dramatic comedy. I knew of it when I was a kid and it was on HBO, but I didn’t watch ‘old folks’ in films, at the time. I wish I had taken the time and not waited so long. This is available on Netflix streaming and I highly recommend you watch it.

The film was nominated for 10 Academy Awards, including: Best Supporting Actress (Fonda), Best Director, Best Picture, Best Original Score. It won three Academy Awards: Best Actor, Best Actress and Best Adapted Screenplay. It was one of the nominees of the 2007 edition of AFI‘s 100 Years… 100 Movies. Rotten Tomatoes rates it as 92% Fresh with an Audience score of 87%. IMDb has it at 7.7 stars out of 10. I enjoyed the film and I rate it 4.25 stars out of 5. Have you seen the film? Do you agree? What would you like to see or hear me review?

—
“Listen to me, mister. You’re my knight in shining armor. Don’t forget it. You’re going to get back on that horse and I’m going to be right behind you, holding on tight and away we’re going to go, go, go!” – Ethel