Today, with the help of my son, 3B and my nephew, whom his mother calls “Wee One,” both of them 16 and strong-backed, I moved everything that was ours out of Test Pattern Studios. It looked weird with all the stuff out of there. But, we moved it all into the new location and we’ll be able to tell you more about that studio in the coming weeks.

If my calculations are correct, we recorded 66 episodes of The Beer Dads in Test Pattern Studios.

We recorded approximately 85 episodes of Fan Interference. That could be a low estimate. It may be closer to 90 but here’s where I’ll put the proverbial “~” in there.

We recorded 36 episodes of Sipping NC: The Art of Drinking podcast there.

We recorded 73 episodes of The Man Who Ate the Town podcast there.

We recorded 10 episodes of Apartment 5B podcast there, which isn’t on the TLD Network, but you should still check it out!

We recorded five episodes of Twisted Tulip Podcast with Stacy V, which has never been released, only recorded and produced.

Such-N-Such Media (the company that produces the podcasts) also does production for outside content. We produced around eight (again, “~”) episodes for the Piedmont Triad Apartment Association’s Not a Complex Podcast in Test Pattern Studios which were recorded off-site by Jon Lowder.

Also, SNSM produces Thrive Podcast that is recorded off-site and sent to me to “massage” it and get it ready. This has just started to be released. If you have people in your life that are dealing with cancer, have them check out this podcast. Or, heck, you or your loved ones don’t even have to have cancer, perhaps you’re in treatment or are the caretaker for someone who is a cancer thriver? This is an entertaining podcast that still touches on subjects important to anyone with “the Big ‘C’.” We have produced around eight of those so far.

If my math is correct (or should I say the calculator on my laptop), then that’s 391 podcast episodes in that 700 days/1 years 11 months.

Again, I can’t thank B Cole enough for allowing us to use the space. I’m going to miss my 7th Street Window but progress happens. Now it’s on to greener pastures, at least that’s what I’m hoping for. Again, more to come on the new space. So, wish me luck for tomorrow as I go and start putting the pieces of the puzzle back together.

—
“I’m easy. Put me in an interesting location with good people and I’m there.” – Jane Curtin

I only did one song, but it was a ton of fun. It’s hard to not sing at the top of my voice along with all the songs but I had to save some at the Vagabond Saints Society does ELO show. There’s no pictures of me (I was next to last) that I’ve seen, yet, but I’ll keep on the lookout. Thanks to Doug Davis, Jerry Chapman, Randall Johnson, Corky McClellan, Ken Mohan, Karon Click (McKinney), Susan Terry, Alex Johnston, Patrick Ferguson, Brian Cole, John MacMillan, Jeffrey Dean Foster, Tony Dagnall and Amanda Sullivan, Stephen Henson, Tammie Davis, Joe Henzler, Lee Wallace, Darrell Hoots, and, especially Bob Campbell for giving up one of his songs for me to have. It was a great night. ELO is pretty righteous. I hate I wasn’t more into them before now.

Whew! What a hot, steamy, turbulent, but extremely awesome weekend it was was. There’s a lot I could talk about but today is Sunday, of the “Silent” variety and I’m just going to say, I love my friends. All of them, but today, I’m focusing the love on my Vagabond Saints Society friends. I will probably talk more about this tomorrow or the next few days but I want to thank Doug Davis, Jerry Chapman, Randall Johnson, Corky McClellan, Patrick Ferguson, Neal Goode and Karon Click for allowing me to be on stage with them. Also, I want to thank Tony Dagnall and Amanda Sullivan, Drew Hofmann, Brian Cole, Brian McCuiston, Lee Wallace, Bob Campbell, Jack Benedict, Marty Rogers, Chris Nelson and John McMillan for allowing me to share the stage with them. And thanks to The Garage (the Official Music Sponsor of The Less Desirables) for hosting us.

I’m just gonna leave this here for your consideration…

—
“And you may find yourself in a beautiful house, with a beautiful wife. And you may ask yourself, “well,how did I get here?” – “Once in a Lifetime” (Byrne, Harrison, Eno, Frantz, Weymouth) 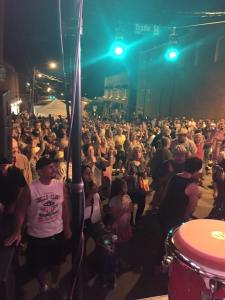 Last night I got to share the stage with some fantastic singers for the Because the Night: Bruce Springsteen by Vagabond Saints Society for the Summer on Trade concert series presented by the Downtown Winston-Salem Partnership. The Vagabond Saints Society core band, on this evening, was Doug Davis, Jerry Chapman, Randall Johnson, Bob Stitcher, Aaron Burkey, Neal Goode, Steve Blake and Susan Terry. The guest singers were (scheduled) Patrick Ferguson of Vel Indica, Richard Boyd of Bo Stevens, Clay Howard of Clay Howard, Jeffrey Dean Foster, Darrell Hoots of Knuckles Deep and myself. In addition, a few bonus singers showed up and were invited on stage. Original VSS member and former Winston-Salem resident, Mitchell Snow came on and sang “Adam Raised a Cain” while local business dude (and honorary mayor of the Arts District (my designation)) Brian Cole sang “Glory Days.” 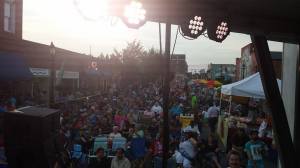 As always it is an honor to share the stage with so much talent and it humbles me to be included in the “Society.” I love these guys and I’d consider them some of my best musical (and in life) buddies. Thank you all and the 2000 or so people that watched for a great night!

So I spent all day Saturday and all day today in Raleigh acting as a ringmaster or barker for the food carnival presented by Lowe’s Foods at the Got to Be NC Festival. It was a fun but very hard gig. I was on my feet for 10 hours yesterday, in a kilt and it was quite hot. I had on my black top hat with the decorative feathers as well and the sun was beaming down on me. I was drinking a lot of water, but as so often happens with me in the sun and heat, I swelled a bit. A lot, actually. Usually, it’s a small bit: ankles, knees, hands a little. I had to take my wedding band off, my watch off, too.

The aftermath of the swelling

I drank a lot of water, a lot of water and never went to the bathroom during the day. What does that lead to? Well, like I said, it leads to a lot of swelling. Also, I had on those wool socks and the swelling was pushing. There were a lot of busted blood vessels from this. I can see the impressions of the socks (and my flashes elastics) on my legs today. I figure they’ll be there for a while.

But, like I said, it was a fun gig and I was well compensated. I figure I said “Pimento Cheese Ice Cream” over 4000 times.  “Frog legs,” “chicken livers” both about 3000 times. “Deep fried Cheerwine” and “deep fried sweet tea” about 2500 times. And “doughnut holes filled with pig parts and deep fried on a stick” about 1800 times. Some people said they stopped by just to see what I was pimping. I took pictures with people in the kilt including one older lady who wanted me to “show a little leg,” which I accommodated. They seemed to get a lot of kicks from that. Many thanks to Brian Cole for giving me the gig.