In recent posts about KISS albums, you will have noticed that I always talk smack about one album in particular. And, today happens to be that album’s 29th anniversary.

Of course, I’m talking about Hot in the Shade (HITS). 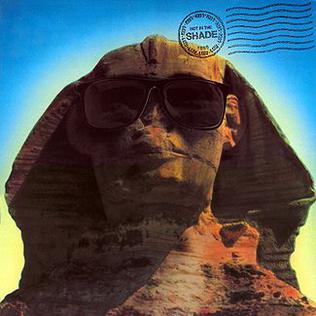 Until Sonic Boom came along, this was my least favorite KISS album. I have two immediate (and probably several subsequent) reasons for this. One, the song “Boomerang,” and two, the lyrics to “Cadillac Dreams.”

I remember buying this album. In the days before the internet’s popularity, you had to read the music rags to know when things were coming out. I hadn’t read one in a while and didn’t know when the album was coming out. I was a freshman in college and hated every minute of it. I had the morning off, which I believe was a Tuesday. I went by Peaches Records and Tapes on Peters Creek and looked at the new release section and saw the cover to this album on cassette. Other than the “postmark” there was no indication that it was a KISS album. My eyes grew wide when I saw it was KISS. Heck yeah!

I bought it, ran straight to my car and put it in the cassette player. Hey… what’s Cinderella’s “Bad Seamstress Blues” doing on this tape? Are they covering it? No. It was a ripoff, though, I still think. The rest of the song (“Rise to It”) isn’t bad, but I get tired of “cheerleading” songs.

Fast forward a few songs and you hear Paul attempt to rap. “Read My Body” is one of the most ridiculous songs I think I’ve ever heard him do. Now, that being said, I don’t really mind it, I just understand it’s not at all good.

Let’s talk “Cadillac Dreams” a second. I hadn’t heard the song yet (it’s the first song on the second side of the cassette), but I took the cassette cover into class with me and I remember sitting in the communications building at WSSU waiting for class and reading the lyrics. What in the wide world of sports is this!? “When I was seventeen, found out just what it means. If you can get it free, it just ain’t worth a damn. When I heard the preacher say, don’t throw your life away. I got that message, and I wrote it on the wall.” I think I was just worn out on that same song mentality over and over. I had lived it since I was seven. Perhaps I was maturing? Perhaps I just needed something new? I don’t know. Then I heard it and it was not better than I had imagined it to be.

I know Paul had stated in an interview about the album (I did read that) that “there won’t be any hammer-ons on this album.” I know they were trying to get back to basics-ish and scale things back. But, most of the songs seem uninspired to me. They lack any real feeling and depth. Yes, I know I’m talking about KISS here but, to me, they were innovative (if but to and from themselves) and always put out things that I liked. As I have stated, this is the first time I was able to see through my KISS “fog” and see that they weren’t infallible. With the exception of a few tunes, I really did not and still do not like this album.

It does seem that Gene was present for this album. The production credits are given to him and Paul. They did use outside writers for most of this album. Both “Rise to It” and “Read My Body” were co-written by Bob Halligan, Jr., who is probably best known for his writing with Judas Priest and Kix (he co-wrote “Don’t Close Your Eyes). Five of the tunes were co-written by former KISS producer/songwriter Vini Poncia including “Love’s a Slap in the Face,”  “Cadillac Dreams,”  “Somewhere Between Heaven and Hell” (with Gene), “Silver Spoon” and  “King of Hearts” (both with Paul). Some of those are good some are bad.

Bruce Kulick co-wrote a few songs on the album including “Prisoner of Love” and “Boomerang.” Let’s talk the latter, now. This song makes no sense to me. Not, lyrically, but musically. It seems disjointed and sounds like it’s about to go off the rail. It’s KISS’ attempt at speed metal. It’s a good showcase for what Eric could do, but the rest of it just seems like a blur of noise. And, Paul’s assessment about pull-offs and hammer-ons is total BS on this song. I really, really, really dislike this song.

Future Spaceman Tommy Thayer co-wrote two songs with Gene, “Betrayed” and  “The Street Giveth and the Street Taketh Away.” Eric finally gets to sing lead on an original tune, that he co-wrote with Gene and long-time KISS collaborator, Adam Mitchell. The song was called “Ain’t That Peculiar” but they reworked it to become “Little Caesar” which was what Gene playfully called Eric when he was being a badarse. It’s okay, not great, but at least he got to do something that wasn’t (and doing a better job of) covering  Peter’s vox on “Beth.”

Pop music songwriting superstars Desmond Child and Holly Knight collaborated with Paul on “Hide Your Heart” which was on not only this album, not only two different albums but FIVE different albums in 1989. My fave is the KISS version but it was also covered, and probably most successfully, by Bonnie Tyler on her album of the same name, Robin Beck on her album Trouble or Nothin’, Molly Hatchet on Lightning Strikes Twice and oddly enough, Ace on his Trouble Walkin’ album. Ace’s wasn’t bad. Bonnie Tyler’s sounded like “Total Eclipse of Hiding Your Heart” and Robin Beck’s version is Bonnie Tyler Lite. I don’t like anything Molly Hatchet does and this is no exception.

But, the most eyebrow-raising collaboration has to be the album’s biggest hit and the band’s second-highest charting single ever, “Forever” which was co-written by Michael Bolton. Yes, that Michael Bolton and NO, not Michael Bolton from Office Space. “Forever” was a ballad and it was a very well-written song. It reached #8 on the Billboard Top 100 chart (only “Beth” did better on the charts). The video was great. Simplistic. To the point. Bruce’s solo was magnificently done.

The tour that followed this album was my first concert ever. I finally got to see them live. I finally got to see anything live. I had to put my foot down to my mother who wouldn’t let me go to concerts. So, on July 27, 1990, I saw Danger Danger (who I loved), Slaughter (who I liked a lot) and KISS. It was the only time I would see Eric Carr play as he passed away just two years later. But, the band came out of “LEON” the Sphinx’s (get it?) mouth followed by lasers and smoke. Eric’s drum solo with the Simmons pads was great to watch, too. I was in awe!

But, back to the album. This was their longest and longest-running studio album. It was barely shy of an hour and it had 15 songs. I think they could have left off “Boomerang,” “Cadillac Dreams,” “Read My Body,” “Prisoner of Love” and “Silver Spoon” and made it a reasonably-tracked ten-song album and it would have been better for me. I felt they just tried too much filler. I know that the minimalist approach of the album and worrying about budget had them overdubbing on demos instead of rerecording them. That could be part of my problem with the album, too. Not enough production, cutting corners, fluffing the album with filler crap. All that just made for a bad experience overall, even with some shining moments. For me that is. It sat at the bottom of the barrel (15 to that point) until the clunkers Sonic Boom and Monster came out. One day I’ll do a countdown of my own of KISS studio albums. A few people have asked about that.

This was the last KISS album I bought on cassette, as I got my first CD player in December 1989.