This weekend, as I said was a little bit weird, timing-wise and we didn’t get to do our normal listening. That also threw our posting off a little on Beeswax Vinyl and in the Underdog Records “Now Spinning” page. So, I’ll leave a little posting about them here. Hah’bah’dah? 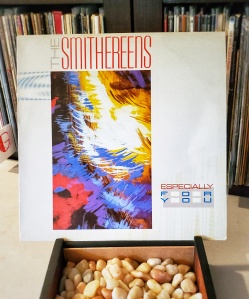 This is from Saturday, Sunday and one today.

First up is a great record from The Smithereens. It’s their debut album from 1986, titled Especially For You. I say debut, but I really mean their first full-length album. They had some EPs and stuff prior. This had “Blood and Roses” and “Behind the Walls of Sleep” on it.

Then came the debut album from one of my favorite bands, The Police. It’s Outlandos D’Amour. They were extra punk/ska at this time and the album is just full of awesome tunes. “Next to You,” “So Lonely,” “Roxanne,” “Hole in My Life,” “Can’t Stand Losing You,” “Truth Hits Everybody” and “Born in the ’50s” just to name a few. I love this album. It’s not my favorite Police album but it’s tied for second with the other three that aren’t Synchronicity.

Next, was The Replacements’ Pleased to Meet Me. It wasn’t Tim or Let It Be (not to be confused with the Beatles album of the same name), which were both on the RS list, but it does have the song “Alex Chilton,” named after the singer of The Box Tops and Big Star. Chilton actually plays on this album, too, but not on that song. It’s punk, it’s rock, it’s alternative. It’s great. I enjoyed listening to it, a lot.

Those were Saturday’s listens. Sunday, we only got one in and that was Walking Across Egypt, which is basically author and musician Clyde Edgerton doing songs based on two of his books, Walking Across Egypt and Raney. This album is a lot of banjo and not-quite-bluegrass-Americana. Edgerton is a native of North Carolina, being born in Bethesda, close to Durham. He is a professor at UNC-Wilmington and has a street named for him in Kernersville. This is signed by Edgerton. The last bit is kind of an audiobook with a couple of passages read by the author. A good listen. 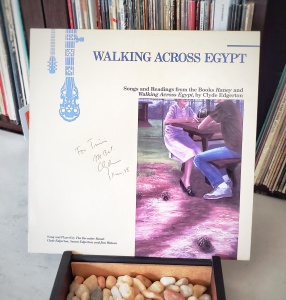 Today, I listened to Pink Floyd’s Animals. This was the transition between Wish You Were Here and The Wall. It’s not my favorite, by any means. It’s a little more proggy than I’d like and less about compact songs. I like compact songs. Heck, read any of my RS list reviews. It’s a concept album that is based on socio-political issues in the late 1970s UK. That was a tumultuous time, for sure. There was turmoil within the band at that time, too. It led to Richard Wright leaving or being fired. Either way, he was no longer in the band. He was just a “hired hand” on The Wall, even though I felt he was a very important part of both of those albums. This was a decent listen. I dug it.

That’s what I got for our playing the last few days. One day, we’ll get back to recording Beeswax Vinyl & More podcast. We’ll talk about more records soon. Hey, speaking of podcasts, we recorded both Fan Interference and The Man Who Ate the Town today. Listen to TMWATT here and FI here.

—
“If you didn’t care what happened to me and I didn’t care for you, we would zigzag our way through the boredom and pain. Occasionally glancing up through the rain, wondering which of the buggers to blame. And, watching for pigs on the wing.” – “Pigs on the Wing (Part 1)” (Waters)