It was a weird week for me as far as podcasting goes. Of the five TLD Network shows, only The Less Desirables was recorded, although we may pull off a Fan Interference tomorrow, we’ll see. But, it was a good episode of The Less Desirables. Charyl Ann Lipstreu was in the studio and we talked about art, body painting, life, music, beer and the big show she has coming up at AFAS’ Red Dog Studio starting next Friday. 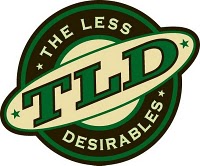 Once I was finished with the production of TLD, I ran over to Doug Davis’ studio to run through two Cars songs for the VSS Cars shows this summer. I wasn’t supposed to get over there because, well, Wednesdays are reserved for TLD. We were done early so there you go!

I did pretty good for just learning them today.

Anywhat! Listen to this week’s episode of TLD HERE.