It was a few weeks ago (June 8) that was the one year anniversary of the death of Anthony Bourdain. Today would have been his 63rd birthday. 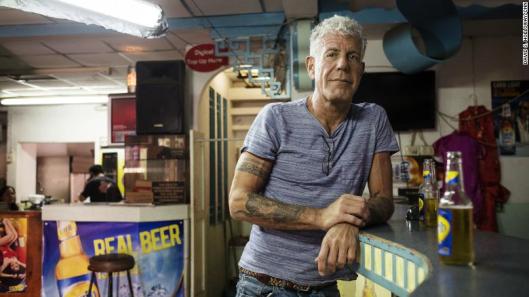 He was The BCPF’s and my favorite “celebrity chef.” It was more than just the food. It was his no-frills attitude. His I don’t care if you like me or not demeanor. Chances are though, he did care. Something drove him to end his life and leave not only his fans sad but a daughter and a girlfriend. No matter what the tabloids say about that relationship, they at least cared about each other and loved each other. It’s not my place to judge how they did it.

I remember staring at the TV that morning of June 8, 2018, and feeling like I had been kicked in the teeth. I felt a bad sense of mourning the whole day, which was a Friday. I didn’t want to do anything that day. He was in our house every week, more than once at times. We have his book, Kitchen Confidential. He was our friend, although we never met him.  CNN replays his show still to this day and I just can’t bring myself to watch them as I know they’re finite. No new episodes will come. No new time with Tony will come.

Tonight, The BCPF and I had dinner at a local “French-inspired” restaurant. Tony had a thing for French cooking but not Paris, he didn’t care about it much. His best friend, Eric Ripert is French and was the one who found him in his hotel room in Strasbourg last June.

I could go on and on, but there’s no point. I just want to say Happy Solar Circumnavigational Anniversary Day, Tony!

—
“For a dinner date, I eat light all day to save room, then I go all in: I choose this meal and this order, and I choose you, the person across from me, to share it with. There’s a beautiful intimacy in a meal like that.” – Anthony Bourdain