Tomorrow is the second annual Spirits of Summer festival downtown. To find out more about it visit The Man Who Ate the Town’s website.

I’ll be hosting two chefs tomorrow at the Lowe’s Food Demo Tent. Come on down and see me, have great libations and great food!

—
“North Carolina wineries will be offering tastings and purchase of their harvest. Beer lovers also find their niche at the festival as several North Carolina craft Breweries will be on-site offering tastings and purchases of their brews. Local Winston-Salem Restaurants will also be on-site cooking up their best menu items in the Restaurant Pavilion for festival goers to purchase and enjoy.” – Spirits of Summer

Today (May 30) is Bethany’s birthday and since she has said her favorite “drive fast” song, or at least one of them, is AC/DC’s “Thunderstruck,” why not give her a little of it. Of course, a little bit differently than normal. Happy birthday, one of my favorite two work wives.

—
“I was caught in the middle of a railroad track. I looked ’round and I knew there was no turning back. My mind raced and I thought what could I do? And I knew, there was no help, no help from you. Sound of the drums beating in my heart. The thunder of guns tore me apart. You’ve been Thunderstruck.” – “Thunderstruck” (Young/Young)

Tonight on The Less Desirables, Danielle was unable to come because she had driven someone back to NOLA and was flying back. So, in her stead, she sent her right-hand gal, Rockie who brought us beer and played along with us. It was a good show. Rockie did a great job with Bethany and me. 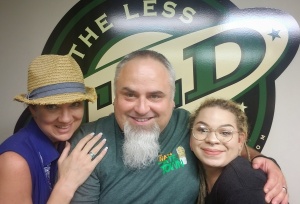 We talked about her, about Bull’s Tavern, music, a lot of things. You can listen HERE.

—
“I think podcasting is here to stay.” – Adam Scott

Burgers, Food, Foodie, Life, Life as It is, Summer of Burgers, The Man Who Ate the Town, WSNC, WSNC Food, WSNC Foodie 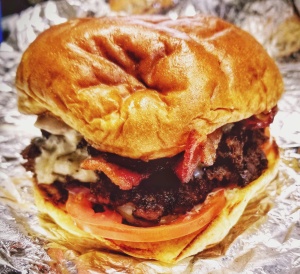 The Double from Uncle Buzzy’s

So, because yesterday was Memorial Day or the “Unofficial Start of Summer,” I’ve declared now through Labor Day (the “Unofficial END of Summer”) the Summer of Burgers. It helps that today is also “National Burger Day.” You can read more about what this entails over on The Man Who Ate the Town website or listen back to last week’s podcast. You don’t need to search, I’ll help you out. Read the rules and event HERE. Listen to the podcast HERE.

Who has a burger for me to try? Are you a restaurateur that wants their burger to be considered? Anyone want to sponsor the summers-worth of events? Get me good burgers, y’all!

—
“I always want to find the best burger in town.” – Dennis Quaid

Life, Life as It is, Memorial Day

—
“All gave some. Some gave all.” – Howard William Osterkamp

This week, like last, was altered because of a Cobras game, which we lost, but the worst part was the loss of our star OL because of a dislocated ankle. But, I did get by Underdog Records for a brief visit on Friday. Mainly because my pal, Clay, purchased a record and left it behind the counter. I had to see what it was and that was my visit. Here’s my “haul:”

That was the haul. Because of the passing of Danielle’s father last week, there wasn’t a TLD/UR Special of the Week, but if you listen to each new episode of The Less Desirables, you can hear the special for that week. There’s a lot of cool equipment in there and of course, Jonathan puts out newly acquired used vinyl almost every day. Go by and say hey. Tell him that I sent you! Use Discogs to catalog your collection, be it vinyl, CD or even cassettes.

—
“Oh, can’t you see I’m not fooling nobody? Don’t you see the tears are falling down my face? Since you went away. Break my heart, you slipped away. Didn’t know I was wrong. Never meant to hurt you now you’re gone.” – “Foolish Beat” (Gibson)

Today is the 36th anniversary of Dio’s Holy Diver. This is a cover from all-women Swiss band, Burning Witches. Enjoy!

—
“Holy Diver. You’ve been down too long in the midnight sea. Oh, what’s becoming of me? Ride the tiger. You can see his stripes but you know he’s clean. Oh, don’t you see what I mean? Gotta get away. Holy Diver!” – “Holy Diver” (Dio)

Today is the 31st anniversary of Van Halen’s second Sammy album, OU812. I always like that album. I’m a synth fan so synthy VH is good VH to me. I couldn’t find a decent cover so instead, I picked the guy who was actually singing here.

—
“I got the tools to satisfy. Just walk away, if I fall shy at all. Come on baby finish what you started.” – “Finish What You Started” (Van Halen/Van Halen/Hagar/Anthony)

Note: HERE THERE BE SPOILERS!!!

Last night, The BCPF and I finished Cheers (finally). So these spoilers are for a show that ended 27 years ago, so I think we’re safe.

We have been at it for around a year. I don’t know if it is over or under. I’m figuring over. But, while I think the ending was good, the reasons I thought it was good, is even better. First off, they did bring back a major character, Diane for a little closure of that chapter. I loved a line by Woody around 6 episodes from the end, while Cliff, Norm, Woody and Frasier were watching a Godzilla film at a drive-in that was going to close. He said he couldn’t understand why an actress would leave a successful series in the middle. A shot or homage, take your pick, I think a bit of both. Anywhat, Diane came back and then left again. That’s good.

Another reason I liked it is what I wish shows this day would employ as when it ends. They didn’t kill everyone off, they didn’t have them all moving away to places they won’t see each other again (I’m talking to you Friends), they simply had each person walk out of the bar to go home to their lives. Sam walked into the darkness to the pool room, and it was done. You felt like tomorrow, Norm, Cliff, Carla, Woody, Frasier, Paul, Phil and maybe even Rebecca would be right back, even though Becs did get married to Tom Berenger’s plumber character, Don. I just thought it was simple and unassuming. I really liked it.

The other thing to talk about, really quickly, is that KISS’ Dynasy turned 40 today. I’ve told the story about it and me before. Go search that in the search bar above. I’m not going into a lot of detail about it. It was their “disco emergence” and the album that threw a lot of people off the KISS train. I like it a lot but like the follow-up, Unmasked, even better. The transition KISS album turned 40. Wow, I’m getting old.

—
“And in the night, in the crowd, she’ll be there as she prances by your watch, while your dreams fade away.” – “Magic Touch” (Stanley)

We didn’t have a full episode of The Less Desirables today as I took time to wish Danielle’s “Papa” a fond farewell. He passed away from kidney failure yesterday, but he suffers no more. I know it is hard on Danielle and her mother, but I know, too, that they’ve had to suffer along with him. So, there must be a little relief in there. But, no matter how much you’re prepared for the loss of a loved one, I figure it is never easy to accept it when it happens. I hurt for them. Darrell was a great dude. Happier thoughts and posi-vibes to the Bull family.

On a more chipper note, Hailey Brooke McFadden, co-host of Fan Interference, graduated this weekend from Wake Forest University, so many congrats to her on that accomplishment. She’ll return to Fan Interference in a few weeks, we hope.

Have an enjoyable journey, Papa and your journey is just now starting, Hailey.

—
“My father didn’t tell me how to live; he lived, and let me watch him do it.” – Clarence Budington Kelland