So today was the big day. It was the DWSP Excellence Awards for 2018. All the recipients were pleased with their videos and since it’s now over and happened, I can say who won the awards. Bailey Power Plant, The Ramkat, Cobblestone Farmers’ Market, The Canteen Bistro & Market, Fiddlin’ Fish Beer Company and Claire Calvin. Claire kind of won three times. She won for herself and her restaurants, plus she co-owns Canteen and since her Alma Mexicana restaurant was the first one in Bailey Power Plant, then she was mentioned there, as well. Also, Kim Lawson is the GM of Canteen and her husband is Richard Emmett who co-owns the Ramkat. It was a lot of one degree of separation going on today. 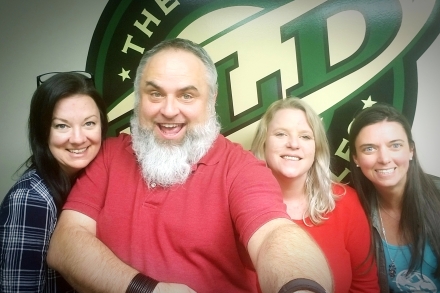 There was a hiccup that wasn’t my doing and I will address that first thing tomorrow, but otherwise, it was a great day.

Plus, we recorded Fan Interference today where we interviewed former WFU and current Arizona Hotshots (of the AAF) QB John Wolford. It was a good interview. Hailey Brooke McFadden is getting a lot of good guests for us. It is awesome. She has some big news that really goes hand-in-hand with my big news that I still haven’t announced yet because I and the entity haven’t worked out the announcement, yet.

Tonight on The Less Desirables, we had Kristen Williams in to talk about K10 Yoga. She was a great guest. And, she got D and B on the floor doing yoga, that’s something.

Stay tuned to the DWSP YouTube channel (and you know I’ll forward it here) for those Excellence Awards vids. Listen to Fan Interference HERE. Listen to TLD HERE.

—
“While the focus has always been presenting live music, The Ramkat hosts performing arts of all stripes, as well as other community events and entertainment.” – Me