Life, Life as It is, Music, New Years Eve, The Plaids, The Ramkat

So, tonight at midnight, 2018 will be gone. There have been great things and less-than-great things all year. Celebs that we lost, financial things, worry, politics, and so on. I figure it’s time to get rid of all that and look forward to a great year, Y’all! It has to be good, right? If we make it that way? Here’s hoping. 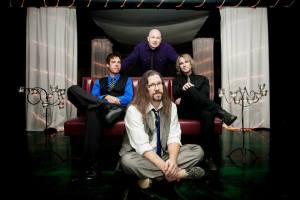 The Plaids tonight at The Ramkat

Well, if you’re going out tonight, please be safe. It’s one of the worst nights of the year for idiot drivers and idiot everything else. Just be careful. If you’re looking for something to do, The Plaids are playing NYE at The Ramkat. A certain blogger, that you all know and love may be doing some guest appearance stuff. I can’t tell you that person’s name but his initials are me.  Go out and see The Plaids, Y’all. And again, be safe.

Until next year, same blog channel…
Scorp out!

—
“Cheers to a new year and another chance for us to get it right.” – Oprah Winfrey 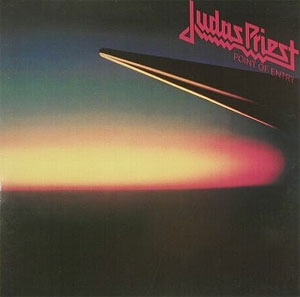 Yesterday was our last visit to Underdog Records. I mean, this year, of course. The BCPF and I will certainly be back next weekend. We have a lot of records to collect, yet, so we’re not done. We will have to get yet another LP case because three full- and one half- sized ones aren’t enough. Our “to-be-listened-to” stack was reset but our “listened-to-awaiting-filing” is getting huge. I mean… huge. Plus, we don’t like leaving them laying flat and that’s what’s happening right now. It’s not good for the records and it takes up a lot of space. Anywhat! Here’s the haul…

This past week, Jonathan actually had a few tape decks for sale in the store. I have somehow resisted the trend of cassettes. They have always been inferior in quality to vinyl, CDs and even streaming. But, hey, if you’re into that, check with Underdog Records to see what they may have for you. Listen to The Less Desirables this week to hear what the weekly TLD/UR special is.  I also used Discogs to make sure I didn’t get a few duplicates yesterday. Discogs is pretty righteous.

This week marks the 47th anniversary of America’s America album. It was originally released without the mega-hit “A Horse With No Name” but that song became a hit and it was reissued early in 1972 with that song included. So here we have a lovely young lady doing her rendition of “Horse” with a little laidback stoner quality, but more importantly, she has great vocal fluctuations throughout. She’s French but I love the accent coming through, too. Enjoy!

—
“On the first part of the journey, I was looking at all the life. There were plants and birds and rocks and things, there was sand and hills and rings. The first thing I met was a fly with a buzz and the sky with no clouds. The heat was hot and the ground was dry but the air was full of sound. I’ve been through the desert on a horse with no name. It felt good to be out of the rain. In the desert, you can remember your name ’cause there ain’t no one for to give you no pain.” – “A Horse with No Name” (Bunnell)

Tomorrow, 12/29, is the 5th anniversary since my last bite of “fast food.” Most people scoff and let it go when I say that, but to me, it’s a pretty big milestone. You have to understand that before my heart surgery (and even after to an extent) I was eating fast food, somewhere about the “3-a-day” mark and sometimes five-to-six days a week. 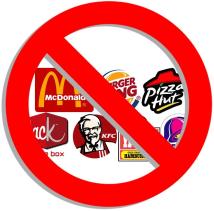 I believe the last thing that I had was a Big Mac, fries and a large Dr. Pepper. I hadn’t had any of that in a few weeks and even then, it was mostly double cheeseburgers from Mickey D’s. I hadn’t had a Big Mac in a long while and I remember thinking that it was pretty awful.

A few more weeks passed before I realized that I hadn’t had any fast food and I figured I’d just keep on keepin’ on. Well, the weeks became months and months are now years. Five of them.

The BCPF, of course, is quite happy about this. She didn’t like me having all that sodium and nitrate goodness and really it wasn’t good for me. It’s not good for anyone, really. I’m not opposed to others having it, I support the existence of the places and I do know that they’re making (perceived) changes to be “healthier” but I feel they will probably never meet a true standard in that realm. But, kudos to them for trying, right?

So, to McDonald’s, Wendy’s, Burger King, Arby’s, Chick-fil-a, Taco Bell, Bojangles, KFC, and even Cook Out, even though they use only fresh beef and nothing frozen or with preservatives and all that, it’s been hard but I will continue on. I’d rather save my burger eating for Zesto, Cin Cin, Small Batch, Willows and other fantastic local establishments.

—
“Fast food is popular because it’s convenient, it’s cheap, and it tastes good. But the real cost of eating fast food never appears on the menu.” – Eric Schlosser

3B, Forsyth Seafood, Life, Life as It is

I am writing this at 10:55p tonight. It feels like it’s 2:55a. I have been up since just after 7am this morning. Met up with 3B at my brother-in-law’s shop to have his speakers put in for this new stereo. Turns out something is wrong with either the installation of the stereo or wiring for the back seat speakers. We can’t figure out what the problem is. I’m going to check with the place of installation to see what say may be the problem. 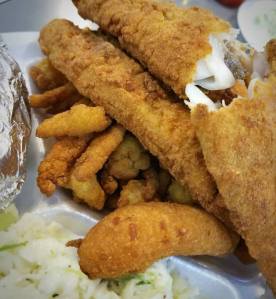 We then ran home and I went to have a business meeting and took 3B along with me. We were there for a bit and came back to town to have some seafood at Forsyth Seafood (for the first time) and we came home to watch something we’ve not seen in a while, The Last Kingdom that just returned for its third season. 3B fell asleep over and over within the first 20 minutes. He went to bed. He was in bed at 6:27p.

Today I did something that I’ve never done before. I had my son, 3B on The Less Desirables. For almost nine years I’ve been doing this show and he’s never been on it. He has been on The Beer Dads for a couple of shows, but never TLD. It was a “year-end/post-Christmas” show and relatively short, but it was still cool. We talked about Christmas, his culinary aspirations, cooking, food, his musical tastes and more. It was just cool having him there for it and talking.  You can hear that episode HERE. 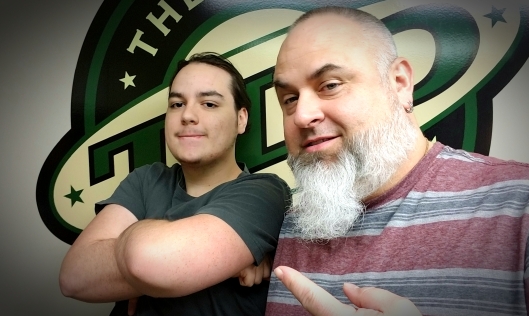 Thank you all for listening, too. And, for reading this blog.

—
“I built a program that crawled job boards to determine which skills employers value, which helped Johnson & Wales explore ways to improve its curriculum.” – Hilary Mason 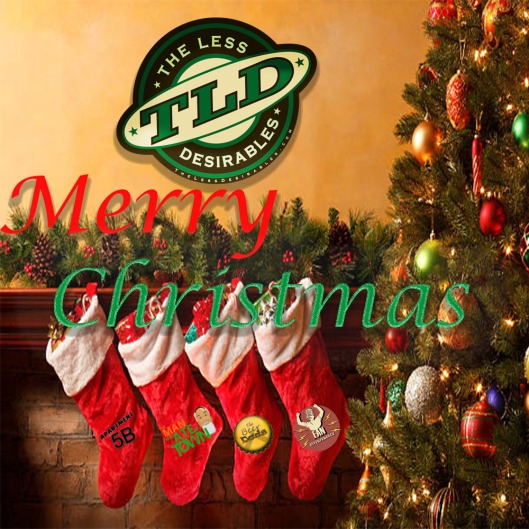 —
It is a fine seasoning for joy to think of those we love.” – Moliere

Most folks call this just Christmas Eve and tomorrow Christmas. Which, is true, but Christmas Eve has always been my favorite; it’s the best. That’s really when my family does our thing. We have the biggest feast, are the most festive and just have a grand time. Now, that The BCPF is in my life and we do everything here with her fam and my fam, it’s all alright! So, we’re doing our thing this evening and here’s hoping you’re having a fantastic evening too. 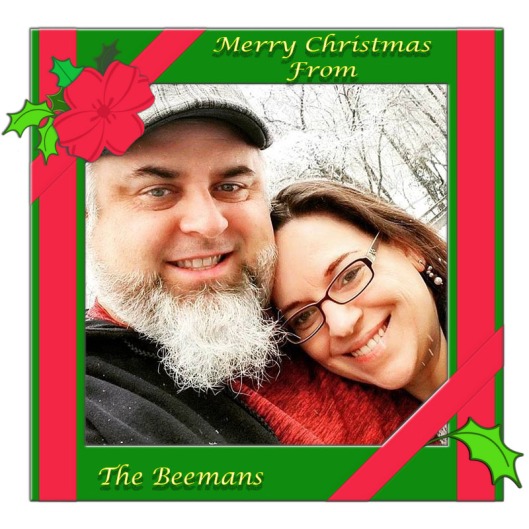 —
“Christmas is doing a little something extra for someone.” – Charles M. Schulz

Yesterday was a pretty big haul, but it was a cheaper haul. I’ll explain more as we go. But, it was fun just being at Underdog Records, as it always is. It’s my candy store. Here’s the haul: 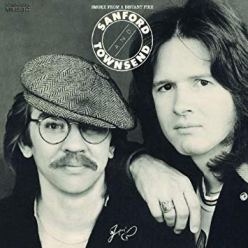 So, from here on, all the albums are $1 bin finds and unless otherwise noted, they are all in VG condition (mostly after cleaning them up). So, here we go:

For your holiday shopping needs, Underdog Records will be open today, Sunday from 11-4 and Monday (Christmas Eve) from 10-3. And, the big thing now is gift certificates, so make sure you either get yours or tell your loved ones to get you one. Listen to The Less Desirables each week to hear what the TLD/UR special of the week is. And, use Discogs to catalog your music collection, be it vinyl, CD or even cassette.

I can’t get enough of this lady. She plays hard rock/metal on drums with high heels on and she rocks it hard! Enjoy!