Here’s the second post today! And yes, this is verbose as was the last. 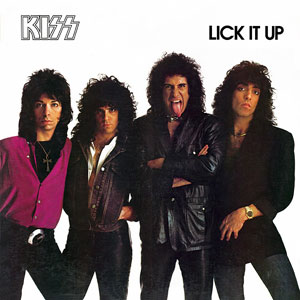 In 1983, Lick It Up was released on this day and also that night Gene, Paul, Eric and Vinnie Vincent showed up on MTV and showed their faces publicly, at least as KISS, without the makeup. It was a weird transition for them, even if they say it wasn’t. Look at that interview and tell me that Gene doesn’t look uncomfortable as he says through his big white grill that it feels good… Uh huh. I think Vinnie looks uncomfortable all the time. Paul seemed the most natural. Eric was just there. Then look at the video for “Lick It Up” and tell me they look comfortable. Gene can’t figure out how to act. His professional career had always been under some kind of disguise. He’s not the most handsome man, truthfully, but really, were any of them? Nah.

Lick It Up, though, was a big breakthrough for the band. It was their chance to bring the people back into the KISS Army coming off the heels of Creatures of the Night, which saw the departure of Ace, even though he was on the cover, he played nary a note on the album. Several guitarists played in his stead on that album and one of those was Vinnie Vincent. Creatures was the rebirth KISS was looking for. It wasn’t quite KISS, but a harder rock version of KISS. I think Creatures is one of their heaviest albums in the entire KISS Katalog. But, they did that under the hidden comfort of their makeup-laden personas.

Truly, the band incognito had run its course. It was time for a new approach. Gene said in his book Kiss and Make-Up that Paul had talked him into unmasking. He was still apprehensive but Paul explained that the makeup had become a stigma and more people knew the characters than they did the musicians and the music, whether people want to admit it or not, was judged more on the makeup than on the merits of the music and songs. I was only 12 when this came out and I was aware of that fact. And, I’m ALL about the show. So, what to do? New direction with the music on the album before, let’s try a new direction in image, as well. I think it worked.

This album was pretty heavy and at times, mean. From the harmonics-driven intro of “Exciter” on to the fade of “And on the Eighth Day,” the album was a non-stop auditory assault. Paul also showed a whole new vocal style starting with this album. He started singing a little different on Creatures but from Lick It Up on, he sang higher, as did Gene, with more power and with more confidence. In fact, I think this album has Paul’s most powerful tone and timbre.

Gene really changed up his singing from just gruff to high and gruff. I can’t sing most of his non-makeup songs and I sing pretty high. The band also started aiming for the “metal” crowd instead of the “kids and rock-n-rollers.” Eric’s drumming was more volatile as well. He pounded the crap out of the drums. I found I was at the same time longing for and also glad they dismissed the drum sound employed on Creatures. It was an awesome sound but it was also overpowering.

Much of what made this album heavier was Vinnie’s playing. He was all about flash and speed and less about feel. But, I think that bled over onto Paul’s style, as well. Paul’s parts were heavier than the KISS we knew. There were no ballads or slower songs on this album. Speaking of songwriting, this marked the first time that there were no outside writers on a KISS album.  People have a hard time believing that, but from the first album (which had a cover – and yes I know the original didn’t have that cover), the second and third rehashed Wicked Lester songs, and so on. Plus, people forget that Vinnie was “in the band” at one time.

This is one of my favorite KISS albums, although it didn’t start that way. I never really noticed it being a “different KISS” until much later. KISS was KISS was KISS to me. I get it now, but I was blinded at the time. As tired of the title track I am, I still love it. We used to do it in Busted Uncle. It was fun. The only song I really don’t care for is “Gimme More” and even that is a pretty good song. The one that all my friends hate is one of my favorites on this album, “Dance All Over Your Face.” I don’t know why but I just dig the heck out of it.

This was the first album that I got on cassette and not on vinyl. So, the copy I have now (180g brand new) is the first time I’ve ever had it on vinyl. 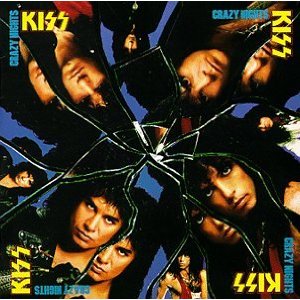 Now, 31 years ago today KISS released Crazy Nights. It is perhaps the most polarizing of the 80s-era KISS albums. I know a lot of critics, fans and even my friends have labeled it as poppy sugary drivel but I am not one of those. Yes, it is poppier. It’s not quite “hair band” material, but not far from it. Their heavy sound had softened a bit, even though they were on their second album with one of their best guitarists, Bruce Kulick who showed up on the tour for Animalize and played on Asylum. I don’t mind sugary pop, though, as you have read me talking about often, Dear Reader.

I believe part of the deal with the overall tone was that Paul and Gene gave up production duties and just recorded music. But, they were also using outside writers and not the likes of ex-Plasmatics members but with genuine pop music writing heavyweights, Adam Mitchell, Desmond Child, Bruce Turgon, Davitt Sigerson and legend Dianne Warren. On top of that it was produced by Ron Nevison who took over duties from David Foster on Chicago albums, Heart’s Heart and Bad Animals, Europe, Damn Yankees, Survivor and my favorite Ozzy Osbourne album, The Ultimate Sin. What absolutely didn’t help was the incorporation of keyboards (played by Phil Ashley).

I remember buying this album on cassette at Peaches. I knew it was coming out but hadn’t heard anything from it. I put it in the car stereo (in my ’74 Chevelle Malibu Classic’s Craig audio system) and waited. It seemed the leader tape was a bit long, so I turned it up thinking it was low. The opening notes of “whew!” for “Crazy Crazy Nights” scared the bejeezus out of me and I nearly wrecked my car. I loved it, though. That followed by “I’ll Fight Hell to Hold You” and “Bang Bang You,” gave Paul a good three-song start. Nice and poppy.

Then Bruce got to do his thing. He schools us on tapping techniques flawlessly and  Eric joins in with a little double-bass flash. This is “No No No” from Gene. The whole thing is a little hard to follow on the beat because it’s about being fast, I think. The only song that I don’t care for is “My Way” which I think single-handedly shows off the overly-poppy nature that many people see the entire album for. Also, as with Lick It Up, one of my faves on there is the one my friends say they dislike the most on the album, which is “Thief in the Night.” It was covered by Wendy O. Williams (also of Plasmatics fame) on an album that Gene produced which could have actually have been a KISS album.

Is this their best album 80s-era or otherwise? No. It is, however, the 80s-era KISS album that I listened to the most. It was the last original studio album that I actually had a love for and enjoyed without bias. The next album, Hot in the Shade, had plenty of letdowns for me. I don’t mean that I don’t love post-Crazy Nights albums, but up to this point, they could do no wrong. I realized on HITS that they could. Between the two came Smashes, Thrashes & Hits, a greatest hits album. I liked it.

This album also had a lot of unreleased things make it to other artists and box sets and such. The original title of the album was Who Dares Wins. I’m glad they changed that.

What are your thoughts on these two albums, Dear Reader? Are they up your alley or not? If you’re not familiar, why not give them a shot? Let me know what you think.