3B, Cooking, Life, Life as It is, school

I know you’re probably tired of all the “back to school” pictures and posts. Well, I hate to disappoint you, Dear Reader, but this one of those. But this one is different. At least this year and next. 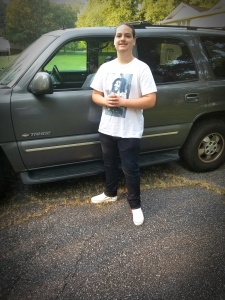 This is the first first day of school that I’ve not had to drive my boy, 3B to school. For the first time in 12 years (Kindergarten – 10th grade – yes that’s 11 but this is the 12th year), I didn’t have to get him out the door, drive through the crazy car line, park or whatever. I did have to get up early and I had to get him up early, actually earlier than the last few years because he’s doing something new, get him in the shower and out the door for him to drive his own self to school. But, it wasn’t regular school. He started his first day of what we called “trade school” in WV but here, we call it “Career Center.” He’s in the culinary arts program and is going to (at least for now) pursue his culinary ambitions. I’m proud of him.

He did good on his trip up there and back to school. I didn’t doubt he would because he has to drive from Pinnacle to WSNC or vice versa several times a week anyway. I think he’ll do well. He just has to keep at it. That will be his downfall, if anything is. Here’s to a good junior year, my son.