Last night, Danielle, Bethany and I recorded the first ever episode of The Less Desirables from our new digs. I have used that term a lot in the last bit but I feel it’s appropriate for this location. Anywhat! Now that we have all the ducks in place, I am in a position to tell you guys of the new space and give you a (virtual) tour. 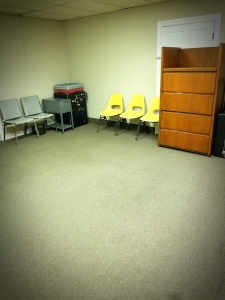 First, the location itself. You know, Dear Reader, that we were in the Test Pattern Studios that were in the back of, you guessed it, the Test Pattern bar; right across from The Garage on 7th Street. Well, we are now about 4 blocks north, almost exactly, from that location. We are now on N Chestnut Street. The area is called Industry Hill (or at least we’re trying to make it so). It’s between 7th Street and Northwest Blvd. It’s where the Warehouse District is/was and whilst some are saying there’s no industry here, I say poppycock. Warehousing is an industry. Textiles is an industry. Furniture is an industry. There is plenty of industry here.

But, my plan to expand Such-N-Such Media into a real media company that goes beyond just podcast production and voice-overs. My new location is more than just a podcast studio. Here’s how it works out. 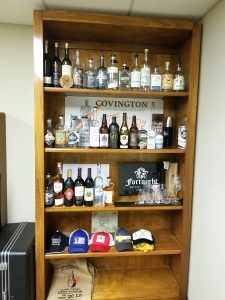 First, there’s the main area. It sits about 300 square feet. I plan on getting a TV and streaming programming on it, including offering some advertising space to sponsors. Yes, the traffic is limited but we do get a good bit of guests coming through for the various podcasts (and other future things) so it’s just another incentive. That’s where the beer fridge is and out great friends over at Machine Gun Graphics are going to make me a huge TLD logo like we used to have in the Chatham Bldg studio. It leads to all the other rooms and studios. It also has all the bottles and libations from the guests on Sipping NC: The Art of Drinking podcast.

Then there’s the podcast/VO/production room. This is where all the magic happens. The six-foot round table that we have had for the last several years is too big. It fits but it makes it hard for people to sit around the table. So, our pals at Sunnyside Mill Works is going to custom make us a four-foot round table. So then we have something special; something no one else has.

Next, the video room. It’s awfully plain right now but I’m going to hang a green screen, a black muslin sheet and a white muslin sheet so I can create nearly any background I need to for video and photography. That opens up my service availability and scope of operations.

Something that I’ve never had before? An actual office for Such-N-Such Media, Such-N-Such Limited (the company that owns the media company) or any of the podcasts. Now, I do. Odd blue walls and all. I don’t know how much I’ll be in there as of right now but I do plan on using it in the future.

I have my own bathroom that I don’t have to share with the rest of the building. The rest of the building has to use the communal restrooms. One of the coolest things in there is an old Wachovia bank vault. Well, it’s night drop safe with a Night Depository “slot” that is made of die-cast iron and what appears to be brass. It’s still pretty cool.

The building we’re in used to be the EG Forrest main offices. EG Forrest was a food distribution company that sold their company a few years back. Being as they were a food distributor, their breakroom actually had a hood system like in restaurants, although there is no stove or grill under it. I am sure there used to be. There is also a commercial grade dishwasher that was left behind and it powers on. Chef Travis said they use the same one at Willows Bistro and is getting me in touch with their technician so I can have him check it out and see if we can get it to work. That would mean I can get clean glasses without having to hand wash them. I hate doing that. So, keep your fingers crossed.

Ideas for the name of the building has been floating around among the landlord and me. We have had a few other names which I think are cool but, for now, we are going with The Lab at Industry Hill. It’s sleek and classy. Odd-kind of something of a name for a podcast called The Less Desirables, huh?

So, there’s the big secret. I did a sweep today of Test Pattern Studios to make sure that I had everything out as it was my deadline. It’s clear. Onto bigger and better things in the Lab at Industry Hill!

Check out the first podcast recorded there, last night, HERE.

2 thoughts on “The Space Within or: Mad Lab?”