Okay, so, I’m admitting this is late because we had a long night. But, there’s nothing like going to a baseball game with your teenage son, just the two of you and it’s especially nice when the home team wins. It’s even nicer when it’s a memorable game. 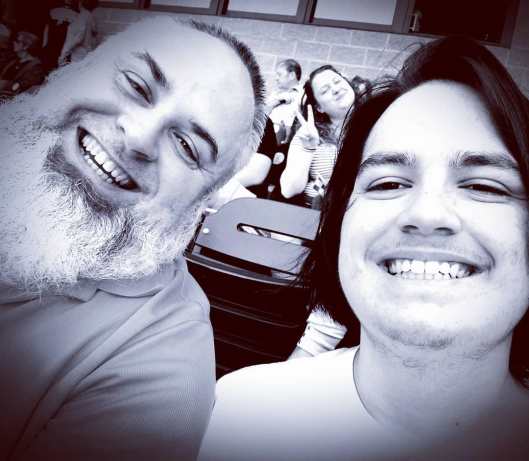 So, 3B and I cooked a little dinner and ran over to Underdog Records to try and catch Jonathan and go over to the game with him. We got there about 6:40p but I didn’t realize that he had closed early, around 5:15p and we went ahead and walked on to the BB&T Ballpark where the Winston-Salem Dash, a farm team for the Chicago White Sox, play their home games and this was their home opener.

That was only a few blocks but the trek was rough on this fat man. We got in the ballpark and made our way over to our seats but they were occupied. The folks in the seats looked kind of official so I had to ask an usher if I was reading the tix right or wrong. It turns out they were in our seats and moved down a bit.

The guy sitting next to me was the video analyst for the Carolina Mudcats (the team the Dash were playing tonight) and he logged every single pitch into his computer and had 8 video cameras total around the ballpark. It was interesting to watch him work. There were several guys in the area that were doing “scoring,” either on paper, on laptops or on tablets, and that too was cool to watch.

The game started and the first few innings were scoreless. The Dash struck first, though scoring one run before closing out the side. The Mudcats came back a few innings later and scored two runs. In the eighth, the Dash pulled off another run and it was tied. They had an opportunity to win in the bottom of the 9th with the bases loaded but a ground ball to short stopped that run.

In extra innings, there is a new rule in minor league baseball where they place a “pinch runner” on second base to increase the chances of there being a score. This is to try and keep the extra-inning games manageable and they seem to think this is how to help. I have mixed feelings about it, but I totally understand. I thought I had lost track of minutes off my life until the analytics guy explained to me what had happened. That’s only in the minors.

Later in the top of the 10th inning, a guy went to first on a count of 2-1. I thought he had been hit by a pitch but analytics guy told me about the new rule in MLB and the minors where if someone is going to intentionally walk the batter, they can just award him the base, he doesn’t have to take four pitches. I’m actually okay with that. It always bored me to tears when they would do the pitchouts.

In the bottom of the 11th, the Mudcats tried some trickery and had the ball in the second baseman’s glove and tagged the Dash’s pinch runner. But, because the ball wasn’t live they didn’t count that. The Dash had runners on at least third base and first but it may have been a “bases-loaded” situation. Anywhat, the pinch runner actually stole home and was safe. Bottom of the 11th, game over. Dash wins! The modest crowd came alive for that.

It was a great and exciting game. The first time I’ve ever seen a home steal in real life and really I don’t remember seeing it on a game I watched on TV, either. Not highlights but watching in real time. That was awesome. And, again, I got to share that with The Boy. We had fun. I saw several folks that I knew and had a warm beer whilst 3B had a cherry lemonade. I can’t wait to go back because I need a few ballpark dogs. We had already eaten so I didn’t have any this time. I will, though.

Yeah, being able to do that with my son is amazing. The dinner wasn’t too bad either. He is doing really good with that. We walked back to Underdog with Jonathan and used his restroom. We hung out for a little bit and then we had to come home and clean up the kitchen since we had to run out so quickly. So, that threw me back writing this. Again, sorry about that.

—
“Joel Booker stole home to give Winston-Salem a 3-2, walk-off win over the Carolina Mudcats on Thursday night.” – Winston-Salem Dash website