My apologies again for yesterday’s short post. We had a heck of a “weekend plus.” I was exhausted. But, I’m here to tell you why. On Monday, our Engagementversary, we drove to Raliegh to see a band that The BCPF would consider “a fave.” They rarely tour and this was special, so how could we pass on it?

The band is Belle & Sebastian. They’re from Scotland; Glasgow. We heard some of their stuff whilst we were over there gettin’ hitched. I didn’t know what I thought about them when I first heard them a few years back when The BCPF put them on a mixtape for me. The more I listened over time the more and more I got to like them. They’re tongue-in-cheek, clever and very good musicians. 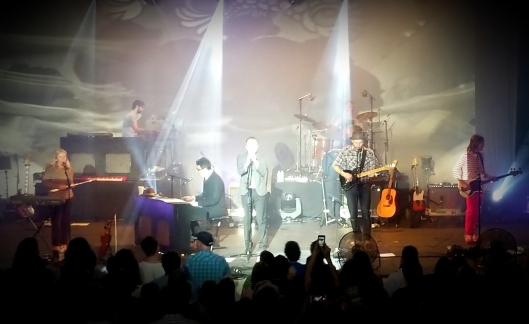 To me, they have a very retro feel. Definitely an “indie” sound. It’s also a very full sound. That’s not too difficult to pull off when there are seven members actually in the band. Their singers, primarily Stuart Murdoch, have unique voices that I won’t say are great, but they are, well, unique… as I just said. The members are all around my age which is pretty cool. I can relate to life, if not the Scottish aspect, even though I do get some of that, too.

So, The BCPF and I stayed at the Hyatt Place North Raleigh-Midtown and ate dinner at a decent chain restaurant that was on the same property as the hotel before Ubering over to the North Carolina Museum of Art, where the show was being held. We had purchased general admission tix which would have gotten us closer to the stage but would have also required us to stand and I’m just not about that. Luckily, the lovely and awesome wife of Superfan Damien of The Less Desirables works at the NCMA and was able to get us an upgrade to reserved seating. And she really came through. 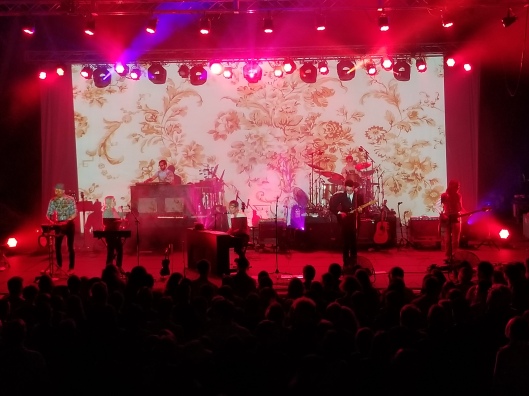 The concert’s venue was outside. Not quite the size of one of the “sheds” (Amphitheaters) but still a pretty good venue with plenty of grass seating and bench seats with assigned numbers. We ended up with awesome seats due to our gracious upgrade. We were 8 rows past the general admission folk (row H) and smack-dab in the middle of the row. So we were eye-to-eye with Stuart throughout the show. I think these were better than the GA tix because 1) we had actual seats, 2) we didn’t have to fight anyone for a spot, 3) we didn’t have to get there early, 4) we were looking straight ahead and not “up” like most of them were. Plus, we had the benefit of being out in front of the speakers, not between them. We won the awesome lottery for sure.

Opening the show was Andrew Bird who was the violinist for Squirrel Nut Zippers and is quite the talent. I really enjoyed his stuff, but I have to admit it started to get old after about half way through. I don’t know that it was anything he was doing wrong or I was just ready to see Belle & Sebastian. I think it was the latter. He did good, though.

B&S at one time had 9 people on the stage at the same time, playing instruments or singing. They even had a young trumpet player named Alex that played on about five or six songs. He wasn’t part of the band. He was from Raleigh and hadn’t played with them before. I think I heard Stuart say he hadn’t played with anyone before. He was pretty good, though. I have to admit that I didn’t recognize most of the songs but I’m not the fan that The BCPF is. They did play several of my faves by them, though, including “Sukie in the Graveyard,” “I’m a Cuckoo,” “I Didn’t See It Coming” and “The Blues Are Still Blue.” The latter was the last encore that they did by request from someone they described as “someone with a bullhorn of a voice.”

It was a great show and I’m so glad we got to see them and we thank Mrs. Superfan Damien for the upgrade. We owe you guys some beer. Thanks to The BCPF for introducing me to Belle & Sebastian and wanting to go see them. I think it’s my favorite of “your music.” If you’re not familiar with the band, Dear Reader, you should give them a shot and you should keep an open mind because they’re certainly an acquired taste. But, you’ll see the talent, I’m sure. Enjoy!

Oh, and I didn’t do beer today because I don’t know what it will be. Danielle is surprising us. But, you should still go to City Beverage and say The Less Desirables sent you!

—
“Sukie was the kid, she liked to hang out in the graveyard. She did brass rubbings, she learned you never had to press hard. When she finished hanging out she was all alone. She decided that she better check in at home. There was an awful row between her mum and dad. They said she hadn’t done this, she hadn’t done that. If she wanted to remain inside the family home, she’d have to tow the line, she’d have to give it a go. It didn’t suit Sukie so she took her things and left.” – “Sukie in the Graveyard” (Belle & Sebastian)