So, Thursdays are my day to do music reviews but today is something special. It was 40 years ago today that one of my favorite, if not my favorite, KISS albums came out. That’s Love Gun. It was the first of their albums that I owned and it started my love affair with the band that kept me dreaming, mesmerized, enamored and inspired me to become a musician myself. 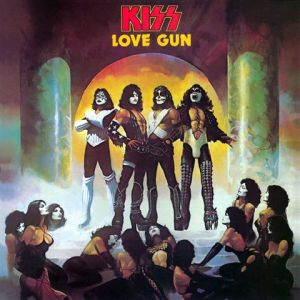 I started long hours at the cover. Both because the band was “larger than life” in their characters and because there were scantily-clad women adorning the cover… ish. I didn’t know as an eight-year-old kid that I wasn’t actually seeing anything. I thought I was. That, too, was mesmerizing. Thanks, Ken Kelly (artist for the cover)!

At this point in their career, KISS was at their apex. They were also starting to bend and crack with the pressures their “#1 in the world” status brought. Ace Frehley and Peter Criss both started to feel that they were bigger stars and needed to be highlighted more, hence Ace getting his first lead vocal credit on his signature tune, “Shock Me.” He was nervous about it and laid on the floor in the studio, he says to help him with his pitch. I think it was so no one could see him doing it, but I wasn’t there, so I don’t know. Peter had had vocal credits on every album thus far. This was the last full-band studio album to feature Peter as on the studio follow-up, Dynasty, Anton Fig of David Letterman’s “World’s Most Dangerous Band”/CBS Orchestra played drums save for one tune, which was Peter’s lone contribution.

It was the tour for the Love Gun album that spawned KISS Alive II, which is my favorite of the two live albums that really matter. Not because it was better, but it was more my favorite time period in the make-up era of the band. The costumes were cooler and they were just everywhere. I loved that. I didn’t miss an issue of 16 Magazine to see what they were doing, older mags to see where they had been, special editions and so on. This time period was important to me. It was also the period for the fantastically awful made-for-TV movie, KISS Meets the Phantom of the Park. That was the first time I really ever saw what they looked like.

This album is pretty much clunker-free. My least favorite song is “Hooligan” but even that is somewhat cool. Peter’s lyrics are kind of ridiculous but it was right for the time. My next least favorite would be “Got Love for Sale.” I didn’t get how cool that song really was until Heavens Sake (the band I was in for many years – and still am in as we never officially broke up) learned it to cover, although we really only did it in practice a few times. “Have love will travel,” that’s classic. The last I’d do without if I had to choose three would be the cover on the album. “Then She Kissed Me” which was a backflipped version of the Crystals hit. I didn’t listen to the first two of these as a kid much, I’d skip over them. But, I listened to the last. Luckily, I don’t have to get rid of any of the those. I love them on the album, I’m just saying they’re my least faves.

On to the ones that I do love, though. “I Stole Your Love” and the title song are some of my favorite KISS songs, ever. I love the riffs of “Stole” and the lyrical content. KISS was never really deep, but they, at times, told good stories. Those are just solid tunes, both of which made the cut for Alive II and “Love Gun” is still a concert staple for the band. Paul Stanley has been known to ride a pulley to a remote stage in the crowd to sing that song.

Gene Simmons’ sex-obsessed freaky-deakiness came out in two tunes: “Christine Sixteen” in which the song’s narrator laments about a 16-year-old girl as she’s coming out of school. The other is “Plaster Caster” which was written about Cynthia Albritton, also known as Cynthia Plaster Caster to made plaster molds of male rock stars’ junk and some female breasts. Okay, then. If you want to see Gene’s love, just ask her. He also had two “conquering” songs, the aforementioned “Got Love For Sale” and “Almost Human.” I didn’t listen to “Human” much as a child either. I really got into that one after I got the CD in 1990.

The production on this album is solid, produced by both the band and Eddie Kramer, who did three of the band’s live albums (including Alive III), Rock and Roll Over and Ace’s KISS solo album (okay he did Frehley’s Comet, too). Gene’s playing is good. Peter’s, too, although I question if everything on there was his playing or session people. I have no proof, just a thought. Ace was still doing well, despite his substance problems, but there’s some solid solo work as well as some of his best guitar stuff on this album. Paul’s vocals were fantastic and the riffage he threw out on the rhythm tracks is great. He played the first half of the solo in “I Stole Your Love,” too.

This album is where my KISS journey began. I guess you can say it’s maybe one of the most important albums in my life? I really do love it. It’s hard to believe it’s 40 years old today. Man, time’s fun when you’re having flies. If you have it, may you take a listen today or tonight. If you don’t, look it up. It is some of their finest work, in my opinion. I have been listening to it on vinyl whilst writing this, but it’s only slightly over 30 minutes long. I have to turn it over again!

Until tomorrow, rock on!
Scorp out!

—
“I remember the day that we met. I needed someone, you needed someone too, yeah. Spend time takin’ all you could get. Givin’ yourself was one thing you never could do. You played with my heart, played with my head, I got to laugh when I think of the things you said. ‘Cause I stole your love, stole your love. Ain’t never gonna let you go.” – “I Stole Your Love” (Stanley)