This is a collaboration effort with Hi-Wire, Fullsteam, Greensboro’s Natty Greene’s Brewing Company, Birdsong Brewing Company and Highland Brewing.  It’s a lot of 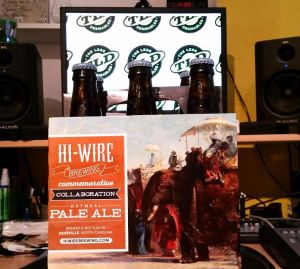 breweries all in one bottle. Per the description on Untappd: The Commemorative Collaboration is the brainchild of co-owner Chris Frosaker. His goal was to bring together some of his favorite breweries from across North Carolina to brew the system’s inaugural batch. The resulting collaboration is a pale ale with a deluge of floral and herbal hops, brewed with oatmeal for body and mouth feel. Sessionable and refreshing, this beer is perfect for toasting our new facility and all that the future holds.

So, I’m not really sure what to expect of the brew but I do know that I look forward to it. It’s relatively light on the ABV, only 4.5%. Let’s hope it’s punchy on the flavor. BeerAdvocate has no rating or Br0s Score on the beer, yet. Untappd has it at 3.64 caps out of 5. RateBeer has no ratings as well. Not many people have had it, it seems. Have you? What did you think? If you haven’t or just have a hankering for more, head on down to 915 Burke Street in WSNC and grab your sixer from City Beverage. Tell them it’s the beer of the week and receive 5% off your order! Tune in to see what Caitlin, Danielle, Tamara and I think of it.

—
“At our core, we brew beer we want to drink on a regular basis, beer we can sit down and have multiple pints with friends.” – Hi-Wire Brewing