Still settling in here at The Test Pattern Studio. Today I recorded the first As Ardmore Turns for The Less Desirables in the new studio. No, not the first episode, but the first one that has been recorded at the new digs. I couldn’t do an episode for it last week because I was moving the studio. I hated not having that, too.

Someone asked me couldn’t I just do a straight read on a specific subject and I said no. For one, the typing and grammar skills of the Ardmorians aren’t top grade skills. They’re also, not easy reads. Plus, I couldn’t read that and control the organ music underneath at the same time. Could I do it without the organ music? Why, no. The organ music,the sound 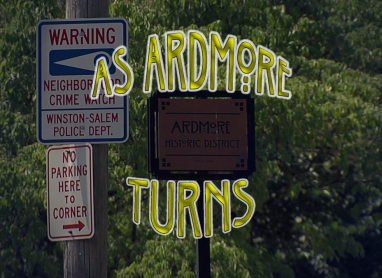 beds and sound effects that I put in the reads are, to me (the one who has to live with the result), 65% of what makes the piece so good. The other 35% is the wackiness of the contributors of the Ardmore Neighborhood Page.

You see, the average amount of time that it takes me to completely produce an episode of AAT is about four hours. That includes the read (that takes a good bit of time), editing that down, while coming up with sound and music effects and placing them. Sometimes I find I need to reread a section to ensure it makes sense in the continuity of the read. I do that and then pick the closing song that ties the whole thing (or at least a part of it) together. Then I have to listen through it again to make sure that it all fits together in real time. Then I mix it down to create what you hear on The Less Desirables every week. I spend a lot of time on it because it’s important to me and the show. I know it’s but one reason that we’ve seen a surge in downloads and hits and we treat it with care. Again, that’s why it was aching me to not have one, but I couldn’t have done it justice and I couldn’t have made it worth hearing. I take it, my show, everything that I do, very serious. I’m glad you listen and enjoy it, too.

—
“But, someone has to provide fodder for AAT.” – Sarah, an Ardmore resident