Thomas Creek is located in Greenville, SC and has been around since 1998. We’ve had a few Thomas Creek beers on The Less Desirables but, I don’t think we’ve had this one, yet. I think the brewery keeps on the down-low but always delivers good beer; it’s good 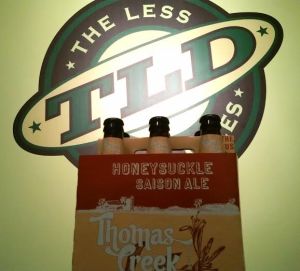 solid brew, consistently. Generally, saisons bore me. Every once in a while one will sneak up on you. The definition of Saison is French for “season” but the part that gets me is the ABV. Traditional farmhouse ale saison styles were 3-3.5% and then later, according to Wikipedia, the 20th century brought it up to 4-6.5%. I could handle that more, at least past 6%. Modern saisons, especially the more commercial ones are around 7%. This one comes in at 4.2%, so it’s going to be light. I don’t like light, usually, we’ll see how that goes. I am interested in the flavor more than ABV, though as I do like honeysuckle. Oddly enough, it’s not listed on Thomas Creek’s website under any category. What have I got us into? Just kidding…

BeerAdvocate has no score for it at all, yet. Untappd has it at 3.44 out of 5. Have you tried it? What would you rate it, out of 5 pints? If you’ve not tried it, you should head down to 915 Burke Street and grab a sixer to drink whilst listening to Caitlin, Eugene, Liz May and myself rate it tonight (or tomorrow) on The Less Desirables. If you mention to Spencer (or whomever is working there) that you heard this was The Less Desirables Beer of the Week, you’ll get 5% off your purchase! Let us know what you think and send your beer suggestions to us via all the social media avenues!

—
“Being located in the heart of the upstate has its advantages. We are fortunate to be part of a consistently growing community of industrious and innovative business owners, non-profits, and like-minded individuals committed to making the upstate a great place to live. Thomas Creek is devoted to serving our community by both delivering an exceptional product to our fans in addition to giving back through reducing environmental impact.” – Thomas Creek Brewery Website